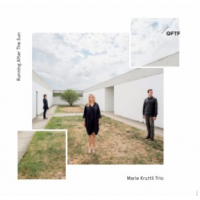 Swiss pianist Marie Kruttli returns on third album Running After The Sun to the trio format of her debut, Kartapousse (Konnex Records, 2015). This latest album, recorded in Berlin, highlights the strengths of Kruttli as a composer and the trio as musicians, with an impressive collection of original tunes.

Hot on the heels of her debut, Kruttli spent a few months in New York and released a short second recording, What Do I Miss (QFTF, 2015), with a quintet. The trio on Running After The Sun—Lukas Traxel on bass, Martin Perret on drums—is the one that played on Kartapousse, having first formed in 2010 to play the pianist's original compositions.

The slow, stately, opening to "Istanbul Dort" showcases Kruttli's talent for harmonies that add intrigue to an already engaging melody. The tune speeds up in its mid-section, becoming more angular and aggressive and almost losing focus, before closing in an upbeat and almost funky fashion. At the other end of the scale "Pocahontas" is a gentle, moving, ballad notable for the restrained playing of all three musicians.

Those two tunes ably demonstrate the band's wide range: the remaining numbers generally sit stylistically in between them. "Running After The Sun" is a humorous and appealing tune that readily conjures images of someone, perhaps slightly intoxicated, attempting the titular action with varying degrees of expertise and success—as with some of the tunes on Kartapousse there's a feel of the highly rhythmic compositions of Neil Cowley. "Kambly Swing" has a distinctly Monk-ish feel, its shifting tempos and rhythms mixing laid-back swing with romantic flourishes and sudden directional changes to keep us guessing. "Balancing On A Wall" is a darker piece, suggesting that the wall may be psychological rather than physical.

Running After The Sun is available as a CD or a vinyl album (this review is of the excellent vinyl recording, which has a slightly different running order from the CD). Both feature cover shots of the trio in a somewhat faded, almost brutalist, building. It's a striking image, but a contrast to Kruttli's very human and emotive compositions and the trio's warm and sympathetic playing.

Side 1: Istanbul Dort; Running After The Sun; Windy; Kambly Swing; Side 2: Balancing On A Wall; Contemplative Birds; Pocahontas; Sailing Day.