By CHARLES WALKER
February 2, 2011
Sign in to view read count 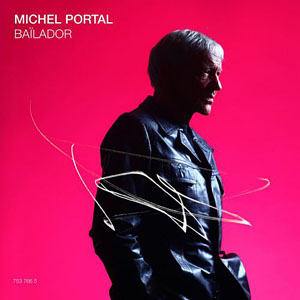 For all the lip service paid to the idea of jazz as a universal language, the modern performing landscape is still, by and large, segregated into separate continental categories, each with a host of attendant stereotypes. For every Randy Weston or David Murray, musicians who have made studious efforts at cross-border communication, there are dozens of territorial musicians, content to limit themselves to a very parochial sphere of influence. Well, quelle surprise! On Bailador, French multi-reedist Michel Portal, having spent most of his decades-long career in the trenches of European free improvisation, turns in a internationally influenced set of grounded, energetic and approachable tunes.

Simply assembling the group heard here must have been something of a logistical challenge, as guitarist Lionel Loueke, trumpeter Ambrose Akinmusire and drummer Jack DeJohnette are all in high demand elsewhere. But, then, Bailador is an altogether more organized affair than the average Portal session. Despite the percolating, high-octane rhythms throughout the album, and the loose, freewheeling improvisations on top of them, there is a shimmering, carefully produced feel to the session, as evidenced by the strength of the writing and arrangements.

"Dolce," for instance, is a tart, jabbing opening salvo, its intricate, restless chord changes attacked with gusto by Portal and pianist-producer Bojan Z. On "Citrus Juice," bassist Scott Colley's menacing double stops blossom into the slithering, side-winding theme. Or on the title track, DeJohnette's firm backbeat balances a slowly building sequence of improvisations. This kind of organic evolution is everywhere on this album, engaging melodies sprouting out of knotty harmonic ground, and it makes the music consistently, unflaggingly enjoyable.

Portal's biggest surprise here is leaving his B-flat clarinet in its case, opting instead for the burlier sonorities of the bass clarinet (though he does dust off his rarely heard alto saxophone for a couple of tracks, and his soprano for one). Much like Eric Dolphy, though in much more linear fashion, he gets into every nook and cranny of the unwieldy instrument. This versatility serves him well, allowing him to explore its haunting, melancholy lower register on "Ombres," a lush duet with Loueke; but it also allows him to battle his way around Akinmusire's upper-register blasts on the burning title track.

In interviews, the Frenchman has claimed that he hopes the music on the record is a starting point, to be fleshed out in further live performances. This video suggests that they are off to a good start. At the age of 75, most people are enjoying retirement, relaxing and retrospectively summing up a life's accomplishments. Portal, like many of the greatest musicians, is instead stretching himself, attacking stylistic, generational and cultural borders with abandon. We listeners are lucky enough to have a record of his travels.