By John Kelman
February 3, 2011
Sign in to view read count 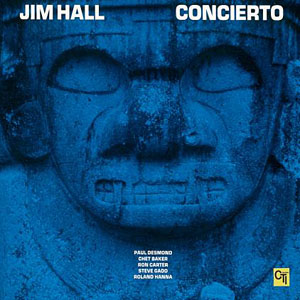 Amongst the many CTI classics of the 1970s, few stand the test of time as well as guitarist Jim Hall's Concierto, an ambitious album that, in its original form, married one side of modern mainstream with a second taken up by a 19-minute version of Joaquin Rodrigo's 1939 piece for classical guitar and orchestra, "Concierto de Aranjuez." That Miles Davis and Gil Evans had already delivered what was considered the definitive jazz adaptation on the trumpeter's 1960 classic, Sketches of Spain (Columbia), and that pianist Chick Corea had grabbed parts as the intro to his now-classic "Spain," were clearly no deterrents to Hall, or to arranger Don Sebesky, who—sticking with this minimalist quintet/sextet rather than the overblown orchestras he'd sometimes resort to on other CTI titles—delivers one of the best charts of his career.

Sebesky perfectly balances the innate economy and astute improvisation acumen of Hall's group with written scores that maximize the beauty of space and nuanced understatement. Trumpeter Chet Baker is in terrific form here, in the midst of a relatively brief cleanup period from heroin and with two strong CTI recordings from the previous year—his own She Was Too Good to Me (reissued in 2010 by CTI Masterworks) and Carnegie Hall Concert, with baritone saxophonist Gerry Mulligan and a crack band that includes drummer Harvey Mason, and a young John Scofield on guitar. Paul Desmond is also in great shape, interacting particularly empathically with Baker on the swinging opener, "You Be So Nice To Come Home To," before the trumpeter takes over with a solo of surprising fire and even occasional grit.

As is the case on the lion's share of CTI recordings, bassist Ron Carter stokes the engine room— this time with drummer Steve Gadd—demonstrating his remarkable versatility. Appearing on all six of 2011's first batch of CTI Masterworks reissues, and playing, as he does, with three different drummers in a variety of contexts, Carter demonstrates just how malleable he is, and how ideal a rhythm section partner he's always been, all while remaining instantly recognizable.

Hall's career has been founded on a thoughtful and restrained economy that's made every note, every voicing, count. What's most remarkable about his playing here is how perfect his choices still are, nearly 40 years later. It's often easy to look back and reassess performances for what they might have been, but there's absolutely nothing here that could (or should) be changed; pianist Roland Hanna also plays with a combination of melodic invention and Spartan lyricism on the two versions of "You'd Be So Nice," including a bonus alternate that, taken at an ever-so-slightly-slower tempo, breathes a tad more than the album version; though, with slightly softer edges, it's easy to see why Hall and producer Creed Taylor made the choice they did.

With its reading of "Concierto de Aranjuez" standing easily beside the Davis/Evans version on Sketches of Spain, Concierto deserves to be considered an equal classic, and a masterpiece in its own right—proof that music can be deep, modern, timeless and accessible.