BY KARL ACKERMANN
November 6, 2017
Sign in to view read count 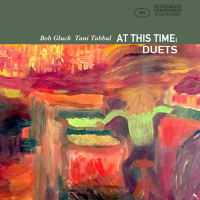 Bob Gluck is a gifted composer of electronic and acoustic music, as well as an educator and writer. As a pianist/keyboardist he has offered innovative and intensely creative modern jazz, finding inspiration in the familiar and the obscure. He has collaborated with Michael Bisio, Jane Ira Bloom, Ken Filiano, and many other top-tier artists. With Billy Hart, Eddie Henderson and Christopher Dean Sullivan he gave us Infinite Spirit -Revisiting Music of the Mwandishi Band (Self Produced, 2016), a companion recording to his book You'll Know When You Get There: Herbie Hancock and The Mwandishi Band (University of Chicago Press, 2012). Similarly, his new album At This Time has obvious links to his most recent book, The Miles Davis Lost Quintet and Other Revolutionary Ensembles (University of Chicago Press, 2016).

Gluck is joined by drummer Tani Tabbal whose resume is extraordinary. While still a teenager Tabbal was playing with the Sun Ra Arkestra and went on to work with Roscoe Mitchell, Anthony Braxton, Oliver Lake, Muhal Richard Abrams, Henry Threadgill, Geri Allen, Evan Parker, Dewey Redman and many other notable artists. He had previously released Before Time After (Self-Produced, 2007), his debut as a leader.

The Styne/Cahn standard, "I Fall in Love Too Easily" opens At This Time in the form of a pleasing Gluck piano solo, his only solo on the recording. A second version of the song is a duet, with Tabbal's light touch taking it from reflective to a bit more jubilant. The Davis quintet (the "second great" version) made the well-worn staple their own, on the classic The Complete Live at the Plugged Nickel 1965 (Legacy, 1995). Wayne Shorter's "Sanctuary" appears on the Davis quintet's Live in Europe 1969: The Bootleg Series, Vol. 2 (Legacy Recordings, 2013). The Gluck/Tabbal rendition breaks down into fragmented melodies, abstractions and odd meters, driven by Tabbal's sharp-edged propulsion. "El pueblo unido jamas sera vencido (The People United Will Never Be Defeated)" is another composition presented in two versions. Written by the Chilean leftist activist Sergio Ortega, the piece was one of several anthems the composer wrote around that political movement. The first version takes an elegiac tone, and the second, while it begins in the same vein, takes on a more defiant quality as it progresses.

Four of the nine tracks on At This Time are co-written by Gluck and Tabbal. "Resolve" and "Persistence" are electronic and drum pieces, unique, but both with an organic and spacey feel to them. Tabbal masterfully executes with a touch that blends with Glucks electronics in a way that makes the two parts a whole sound. At This Time highlights both cagy and unconventional interplay and subtle atmospherics, and like everything in Gluck's catalog, it is as intriguing as it is listenable. The CD cover features a painting by Gluck.