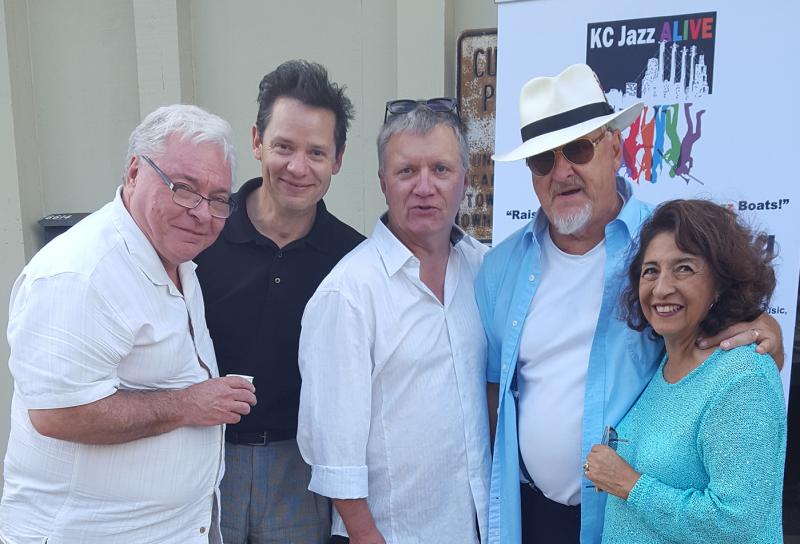 BY TESSA SOUTER AND ANDREA WOLPER
November 6, 2017
Sign in to view read count

After a Tony Bennett concert at the Midland Theatre, I saw Tony exiting the side door. I stopped the car in the middle of the street, and ran to meet him. We spoke for a few minutes. What a gentleman! He will always be my favorite.

Welcome to KC Super Fans, part ll! Tom and Geri (no, not Tom and Jerry!) aren't the first spousal Super Fan team we've featured (that distinction goes to Roberta DeNicola and Richard Berger), but they're our first Kansas City super fans, and we love them for it. Geri St. Clair and her partner in life, love, and jazz, October Super Fan Tom Wells, make it absolutely clear—should anyone have doubts—that their city has great musical offerings and a powerful jazz community. Read on to find out why Geri thinks KC is the best place to be.

Tell us a little about yourself
I'm a native of Kansas City. I always thought that someday I would live in New York City or maybe a suburb of Los Angeles. Becoming a singer, movie star, or dancer was my goal, but it just didn't happen. Kansas City is the only place I have ever lived, and I feel fortunate because I found that Kansas City has the best in live music, especially jazz.

What's your earliest memory of music?
I remember music from about age three. Both sides of my family were always into music. When we had family gatherings on Sunday, there was the piano, guitars would come out, we sang. My young aunts taught me to dance at a very young age. Eventually, my brother and I learned how to play accordions. I think the only song I remember was the "Beer Barrel Polka." Boy, we were good—or so we thought. I played with my two brothers who were so talented. Unfortunately, I lost one brother to diabetes.

How old were you when you got your first record?
I remember a gold record player given to me at Christmas when I was four or five years old. The records were kiddies' songs. Then when my parents bought a blond TV set with a record player, I got 45s. My girlfriends and I would dance to "The Twist," "The Pony," "Mashed Potato Time," "Locomotion," "Duke of Earl," etc. But neither the nuns nor my parents would let me play "The Stripper!"

What was the first concert you ever attended?
When I was twelve years old, my parents gave me the opportunity to attend a boarding school in Maryville, Missouri, just north of Kansas City. Those were some of the best four years of my life. Northwest Missouri State University is also in Maryville, and even though we were in high school, the nuns allowed us to attend programs and concerts at the college. It was here that I learned of jazz from the likes of Al Hirt and many other jazz musicians who performed at the college. Following this experience, unlike my peers, I gradually moved from rock and roll to following more jazz.

Was there one album or experience that was your doorway to jazz?
In 1967, Kansas City sponsored a jazz concert starring Doc Severinsen, Harry James, and other top names, as well as twenty to thirty local musicians. Tickets cost all of $2.50. Everyone dressed like we were going to a New York club: the women wore our finest dresses and high heels, and men wore three piece suits with ties and long sleeved shirts showing off their cuff links. That event, where I got to see both national stars and our local talent further hooked me into following jazz. I knew that someday I would be in New York to see and hear musicians who were famous and had finally made it.

How long have you been going out to hear live music?
As long as I can remember.

How often to you go out to hear live music?
Three or four times a week.

What is it about live music that makes it so special to you?
Seeing music played is so much richer than hearing it on CD or radio. You can see the energy that goes into the musicians' work. And it's fun to share memories with friends and family about past live performances.

What are the elements of an amazing concert?
Amazing concerts obviously have great musicians, artists, actors, etc. One thing that's important to me are the acoustics.

What's the farthest you've traveled to get to a jazz performance?
The farthest I've traveled to see a concert was to Europe in 2006. Bobby Watson, Director of Jazz Studies at University of Missouri—Kansas City, planned a trip to Paris, Montreux, and Rotterdam with UMKC jazz students. We were able to join the trip as members of the Friends of Jazz, an organization that supports the jazz program. The music was the best. The students played almost under the Eiffel Tower in Paris, in the mountains of Montreux, and finished out a concert at 12:00 a.m. in Rotterdam, at the largest jazz festival in the world. We traveled with other jazz enthusiasts, and that made the trip even better.

If you could go back in time and hear one of the jazz legends perform live, who it would be?
Ella Fitzgerald. Ella is indeed "The First Lady of Song." From her troubled childhood, she turned to singing. Dreaming of becoming an entertainer, she won a $25 first place prize at the Apollo Theatre. The rest, as we say, is history. I found her history quite moving and, of course, her music is the best.

What makes a great jazz club?
Kansas City has some great clubs, and recently more clubs have opened. The musicians are great, the acoustics are good. Some clubs are for socializing, others are just for listening. Depending on my mood, I can do either, although the clubs with food tend to lure me. We are so lucky to have clubs that start the music at 4:30 p.m. That's just about dinnertime.

Which clubs are you most regularly to be found?
In 1990, during the ten o'clock news, I saw the The Phoenix featured as a newly-opened club. The next day, I hurried there to see what this club was all about. I have been a regular ever since, meaning I'm there two or three nights a week. For many years I had seen at a distance my now-husband Tom Wells there, but we never acknowledged each other. In 2005, we finally met through mutual friends. In 2009, we finally became "Tom & Geri" (the cat and the rat) in a wedding ceremony that included mostly family. Roger Wilder (piano) and Carl Bender (tenor sax) played "It Had to Be You" as I walked into the living room from the bedroom (about 10 steps—ouch, my feet hurt!).

Although it's not a club, I can't speak of Kansas City jazz without mentioning the Kansas City Jazz Orchestra, a 17-piece orchestra made up of the Kansas City and surrounding area's top jazz musicians. It was the brainchild of Jim Mair. Jim, his wife Mary, and a group of very dedicated and hard-working folks established it about twelve years ago. Tom and I have had season tickets since the beginning. It has been enjoyable to watch the KCJO progress from playing at a church on the Plaza, to the historic Folly Theatre, and finally to the world-renowned Kauffman Center for the Performing Arts. It now has wide community support. We feel connected, as our friend Jim Mair was the first Artistic Director/Conducter, and the current director, Clint Ashlock, is one of the students we went to Europe with in 2006.

Is there a club that's no longer around that you miss the most?
Growing up, I often heard mention of the Colony Steak House. When I turned 20 years old I went to see Marilyn Maye or Kay Dennis perform there. What an experience. Soon after that, the club closed, and I felt a big loss. It was quite a while before I began to go to other clubs in Kansas City. I tried to attend as many concerts as I could, but I was young, going to school, and money was sparse.

Do you have a favorite jazz anecdote?
My favorite memory was driving up 13th Street after a Tony Bennett concert at the Midland Theatre. I saw Tony exiting the side door, stopped the car in the middle of the street, and ran to meet him. We spoke for a few minutes. What a gentleman! He could have asked me to get out of his way, but instead he smiled and we talked. He will always be my favorite.

How do you discover new artists?
Our jazz friends are always in tune with what is happening around the country. Other sources include the newspaper and JAM Magazine (the Jazz Ambassadors' bi-monthly rag). Last year we read about the The Hot Sardines, and I thoroughly enjoyed their performance at the Folly Theatre. I was happy to read they will be back in Kansas City next year.

Vinyl, CDs, mp3, streaming?
I usually listen to local music or classics on the radio, CD's, and Pandora.

If you were a professional musician, which instrument would you play and why?
I am a fan of all instruments. Since I already play the piano, I think I would become more polished and learn more about playing jazz on that instrument. I also enjoy singing and have been a choir director.

What's your desert island disc?
Any disc that has the song "Misty." I've heard many versions, slow and fast, and I like them all. Many musicians remember it as my father's favorite, and my favorite, and they play it for me when I'm at their gigs.

What do you think keeps jazz alive and thriving?
Just as with any type of music, it is the talented musicians and the patrons that keep going to the clubs or listening to CDs. When I'm by myself in the car, I turn up the volume to listen to the musicians in the background, as well as the lead players. Music is alive for me when I'm in my car. I feel that the music is being played right there. That gives me a smile.