This week, Scandinavian sounds from both Linda Fredriksson and Ingebrigt Håker Flaten, a slick '70s set from Randy Weston, Freddie Hubbard and Joe Henderson, then, a Latin groove takes over with Mongo Santamaria, Oscar Hernandez and more, and finally, zone out in Brazil with Goatface! Welcome friends and neighbors to The Jazz Continuum. Old, new, in, out... wherever the music takes us. Each week, we will explore the elements of jazz from a historical perspective. Playlist Linda Fredriksson ...

Blue Note's two 180gm vinyl-reissue series--Blue Note 80 and Tone Poet--continue on their enigmatic going on erratic, but mostly magnificent paths. Tone Poet is billed as the audiophile option but, on a fairly limited sampling of both series, there seems to be little, if anything at all, separating the two in audio terms. The key difference is that Tone Poet has the more luxurious, heavyweight packaging. Whatever. It is the music that counts—and 22-year old Freddie Hubbard's 1960 label debut ...

In the summer of 1972, at the age of 25, I was working by day as a Customs Broker for the venerable jny: San Francisco firm of Hoyt, Shepston & Sciaroni, and by night as a jazz pianist and arranger for an Afro Cuban jazz band called Kwane and the Kwandito's, which played a lot of the repertoire of Mongo Santamaria, Cal Tjader, and Horace Silver five to six nights a week throughout the Bay Area. At the ...

May 24 A slight chill in the air as I enter the jazz club. It is near empty, but the bartender is ready for anything. I straighten my vintage tie and count my wedge to make sure I have the starter amount for my doorman night. With the regular bassist back on stage, the quint is into a well-oiled groove. It is impossible for them to sound better. They're playing Freddie Hubbard “Little Sunflower" and the normally dour ... 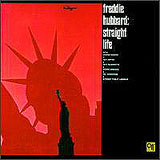 CTI Records reissued trumpeter Freddie Hubbard's November 1970 date, Straight Life, in 2011. As with some of the other reissues in this series (see John Kelman's in-depth discussion of some of the more important of these), its availability on compact disc has been spotty. Straight Life is a good--if not great--record, and it's good to have it back in circulation.The album is pretty simple. Two numbers--the relatively fast title track and Weldon Irvine's slower-grooving “Mr. Clean"--are long modal-funk ... 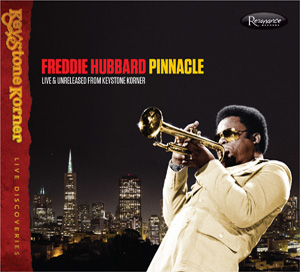 Blistering. That is almost the only way to describe a solo by trumpeter Freddie Hubbard. Even from the beginning with his early recordings of the late 1950s, Hubbard sported a tone and attack akin to a chemical burn. He always had the classic posture of the trumpet player. Not the misanthropic one adopted by Miles Davis, bent full over, blowing toward the ground. Hubbard leaned back to an almost impossible angle, tucked in his chin and folded his elbows in ...

Trumpet great Freddie Hubbard, who died in 2008 at age 70, was at his peak in 1980 when Pinnacle was taped. He had recorded with greats, from Wes Montgomery and Art Blakey to John Coltrane, Sonny Rollins, and Oscar Peterson, and led many groups of his own. In his prime, from the sixties through the early nineties, critics acknowledged that he could play faster. and with more chops, than most anyone. His best playing days ended in ...