By C. MICHAEL BAILEY
January 17, 2017
Sign in to view read count
Alto saxophonist Art Pepper's comeback began the release of Living Legend (Contemporary, 1975). His previous 20 years had been fully devoted to heroin and prison, and their inevitable aftermath. Following the release of Living Legend, Pepper toured Japan in April 1977 and March 1978. Pepper found his most dedicated and enthusiastic crowd in Japan, recording a good deal of live material there.

In 1979, Pepper was approached by a small Japanese niche label, Yupiteru, later to become Atlas Records, to record for them. Specifically, the label wanted "authentic 1950s West Coast jazz" of which Pepper was part the genesis. Unfortunately, at the time, Pepper was under exclusive contract with Contemporary/Galaxy Records and not permitted to record as a leader for any other label. Pepper's wife, the beautiful and crafty Laurie Pepper, suggested that Pepper record rather as a "sideman" and permitted to pick the "leaders." That tidy setup enabled Pepper to record with alto saxophonist Sonny Stitt, pianist Pete Jolly, alto saxophonist Lee Konitz. Trombonist Bill Watrous, trumpeter Jack Sheldon, and drummer Shelly Manne.

These recordings resulted in seven Atlas releases between March 1970 and January 1982 (Pepper died five months later, June 15, 1982). Originally released only in Japan, these recordings were collected for the 2001 box set Art Pepper: The Hollywood Allstar Sessions (Galaxy). What the Omnivore releases have to offer in addition are individual releases with new liner notes by Laurie Pepper and previously unreleased material from the sessions. That, and as swing-for-the-fences remastering that makes this music pop. 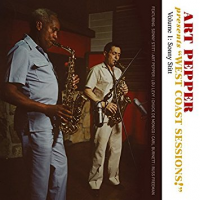 Art Pepper's recordings with Sonny Stitt were originally released as two sets: Groovin' High: Sonny Stitt and His West Coast Friends (1980) and Atlas Blues, Blow! & Ballade: Sonny Stitt and Hi West Coast Friends (1980). Pepper and Stitt had played together before when Pepper was playing the Black Hawk in San Francisco and Stitt asked to sit in. The account was captured in Pepper's autobiography, Straight Life: The Story of Art Pepper (Da Capo, 1979), ending the book with this soliloquy on his choruses in "Cherokee" following Stitt:

"I forgot everything, and everything came out. I played way over my head. I played completely different than he did. I searched and found my own way, and what I said, reached the people. I played myself, and I knew I was right and the people loved it, and they felt it..."

After his comeback in 1975, Pepper did this every time he took the stage. However, on these Atlas sides, listeners are treated to a relaxed and almost jovial Pepper, one who is obviously having a good time. With Stitt as the erstwhile leader, Pepper may have thought he had nothing to prove, playing as lyrically and composed as his 1950s recordings. The pair of saxophonists work through well-trodden terrain form the bebop era. Supported by pianist Lou Levy and Russ Freeman, bassist Chuck De Monico, and drummer Carl Burnett, Pepper and Stitt had all the support that needed and took advantage of it.

Omnivoire's present release features two unreleased takes of "Bernie's Tune," take one of "Wee" and an alternate take of "Groovin' High." Many of these pieces, Pepper covered on his sublime Art Pepper + Eleven: Modern Jazz Classics (Contemporary, 1959). "Scrapple from the Apple," "Walkin,'" "How High the Moon," all were well-known bop fare. The pair surprises with a spirited performance of Lester Young's "Lester Leaps In," (both playing tenor saxophone!) featuring a driving Russ Freeman piano solo. Set concludes with three fine ballads, "My Funny Valentine," "Lover Man," and "Imagination," demonstrating that these renown bop artists could slow down and play pretty. Stitt bears the Bird muse throughout, while Pepper displays a muted version of the inferno he was to become at the end. Twenty years after the heyday of bebop (which I count as the death of Charlie Parker in 1955, this music remains as vital now as when recorded and realized here. 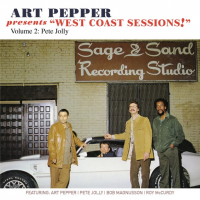 Art Pepper and pianst Pete Jolly were not strangers when they met in in February 1980 to record Strike Up the Band, the third of seven recordings for the Japanese label Atlas. Pepper and Jolly had recorded together at least six time in the 1950s on Jolly-led dates and the two together on Chet Baker and Shorty Rogers' dates. Pepper is in his element, playing as a quartet with his most sympathetic bassist, Bob Magnusson. Roy McCurdy round this out the rhythm section on drums. A much cooler session than the Sonny Stitt sides discussed above, Pepper and Jolly share a certain lyric simpatico that translates best on the ballads, "You Go to My Head" and "Everything Happens to Me."

The upbeat selections, "Strike Up the Band," "I Surrender Dear," and "Y.I. Blues" (the latter contributing an alternate take and take 3 to the previously unreleased material) find Pepper relaxed and strolling in his delivery, which is pointed and precise. Jolly's playing is wide-open and smiling. The lengthiest take on the session is a breezy slow "Night and Day" that is refreshing and warm. These Atlas recordings exist in a wonderfully strange part of Pepper's final period, one punctuated by his major label releases Straight Life (Galaxy, 1979) and Tete a Tete (Galaxy 1982), his next to last recording. Pepper was artistically comfortable having reached and retained his zenith, one he had been deprived of until 1975. This is music for which to be grateful.