By Jerome Wilson
January 26, 2021
Sign in to view read count
Here are three releases of newly discovered material by iconic jazz musicians from the '50s and '60s. Two fall in line with the leaders' established legacies while the third presents its subject in surprising company.

This CD consists of previously unreleased takes from the recording sessions for Dave Brubeck's classic album, Time Out (Columbia, 1959). Most of these versions stick to the framework of the familiar ones but have different solo statements. Brubeck takes an extended, creeping blues feature on "Blue Rondo A La Turk," while "Strange Meadowlark" is played at a more relaxed pace with a witty Paul Desmond solo that quotes "Bewitched, Bothered and Bewildered." "Three To Get Ready" has a slightly more formal feel that it makes it sound like a John Lewis composition but is enlivened by the sly remarks of Desmond and drummer Joe Morello.

Then there is the album's most famous piece, "Take Five" which sounds radically different here. Paul Desmond's alto melody is more straightforward and tentative and Joe Morello's authoritative rhythm vamp is missing. Instead, he just accompanies the melody by ticking on his cymbals. His solo spot is also completely different. Instead of the dramatic rolls around his drum kit that he does on the hit version, Morello just alternates touches and patterns, building to a thundering, blunt force climax that demonstrates why he was idolized by Led Zeppelin's drummer John Bonham. 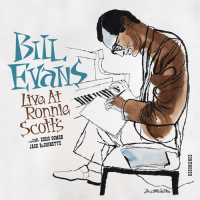 This is the third release in recent years from the short-lived version of the Bill Evans trio that included Eddie Gomez on bass and Jack DeJohnette on drums, this one coming from a 1968 engagement at Ronnie Scott's in London.

These tracks are recordings DeJohnette made directly from the bandstand and the sound is not always the best. On the first seven tracks of Disc One and the last four of Disc Two, the balance is off. The drums are in the front of the mix and tend to overwhelm the piano when the entire trio plays. The sound balance is better on the rest of the set though, and the music throughout is top notch. Evans plays familiar pieces from his repertoire with energy and flair, such as a powerhouse "Someday My Prince Will Come" and a lyrically waltzing "Emily." Gomez and DeJohnette give fine support and the bassist even gets his own dramatic feature spot on "Embraceable You." There is also the fun of hearing Evans on a few tunes rarely captured in a trio setting such as a stately rendition of Denny Zeitlin's "Quiet Now" and a frisky romp through Thelonious Monk's "Round Midnight" with particularly elegant piano and a masterful Gomez solo.

In 1979 vibraphonist Wolfgang Lackerschmid teamed up with trumpeter Chet Baker for a duo album. That went so well they toured together and eventually went back into the studio with an expanded group featuring Larry Coryell on guitar, Buster Williams on bass and Tony Williams on drums.

At first glance, putting two volatile musicians like Coryell and Tony Williams together with "Cool Jazz" legend Baker seems an odd match, but the session works well. A nice laidback chemistry develops between Coryell and Lackerschmid, reminiscent of the guitarist's days with Gary Burton, with Baker slipping his minimalist bluesy lines into just the right spots. "Mr. Biko" is a supple piece of funky jazz-rock, while "Rue Gregoire Du Tour" has guitar and trumpet blending nicely on a friendly quasi-Latin melody, Elsewhere, Baker sails nicely on the up-tempo swing of Buster Williams' "Toku Do," and gets into a customarily lovely ballad mood over Coryell's strumming on "Here's That Rainy Day." Unfortunately that track fades out after only four minutes. "Balzwaltz" is a gilding waltz dominated by Baker's quiet mastery and Coryell's billowing licks, which also has the trumpeter singing a wispy but weirdly soulful scat vocal. There's also an alternate version of this tune included where instead of singing, he plays a regular trumpet solo.

Tracks: Disc One: A Sleepin' Bee; You're Gonna Hear From Me (Version 1); Yesterdays; Turn Out The Stars; My Man's Gone Now; Emily (Version 1); Spring Is Here; Embraceable You; For Heaven's Sake; Someday My Prince Will Come. Disc Two: Quiet Now; 'Round Midnight; Stella By Starlight; Alfie; You're Gonna Hear From Me (Version 2); Very Early; Emily (Version 2); Waltz For Debby; Autumn Leaves; Nardis.