Maria Mendes: Along the Road 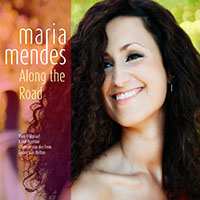 Virtuosity needn't be on display at every moment; restraint, in fact, is an important yet often overlooked aspect of true virtuosity. Norma Winstone is a clear example; certainly capable of plenty, more often than not the British singer's performances are defined by nuance, subtlety and a direct line to the heart of the music. Maria Mendes is another, with the spirit of Brazil looming large over this young Portuguese-born/Netherlands-resident singer's impressive debut, Along the Road—a nine-song set of standards, material by well-known South American composers, one original and one very pleasant surprise.

With harmonicist Wim Dijkgraaf sharing the frontline, Mendes is ably supported by a trio of Dutch musicians clearly conversant in both jazz and Brazilian traditions. The set opens on a gently optimistic note with Brazilian songwriter Ivan Lins' enticing 1989 hit, "Love Dance." From the get-go, Mendes finds the essence of these songs and, with a pristine, pure voice and the slightest turns of phrase, makes each one her own. "Love Dance" also features a lovely, lyrical solo from Dijkgraaf; unmistakably influenced, in his formative years, by the great Toots Thielemans, with Dijkgraaf's now-personal confluence of "elegance, sophistication and emotion," as accurately described on his website, the harmonicist may well turn out to be the aging Belgian's torch-carrier.

Unlike some singers, Mendes' vibrato is simply one more color on her palette rather than a stylistic constant. And if she avoids overt virtuosity at the end of "Obsession," Mendes proves she can scat with the best of them on Hermeto Pascoal's enduring "Chorinho Pra Ele," which also gives bassist van der Feen a rare but fine moment in the spotlight. As for Mendes, her articulation is rapid-fire and absolute accurate, as she proves as capable of navigating Pascoal's changes as her band mates.

But beyond a soft look at "Come Rain or Come Shine" and a metrically playful yet wholly organic look at "Somewhere Over the Rainbow," it's Mendes' "Olha Só No Meu Olhar" that's Along the Road's biggest surprise. On this reverent yet personal adaptation of Pat Metheny's "Always and Forever," from the guitarist's classic Secret Story (Nonesuch, 1992), the singer takes the more expansively orchestral original and, with the addition of her own Portuguese lyrics, makes it even more intimate.

All too often, young jazz singers feel the need to prove something and all the attendant excesses that go along with it; on the elegant, gentle, joyous Along the Road, Mendes makes clear she has absolutely nothing to prove but plenty of promise and much to say.