Advertise
6
Catching Up With 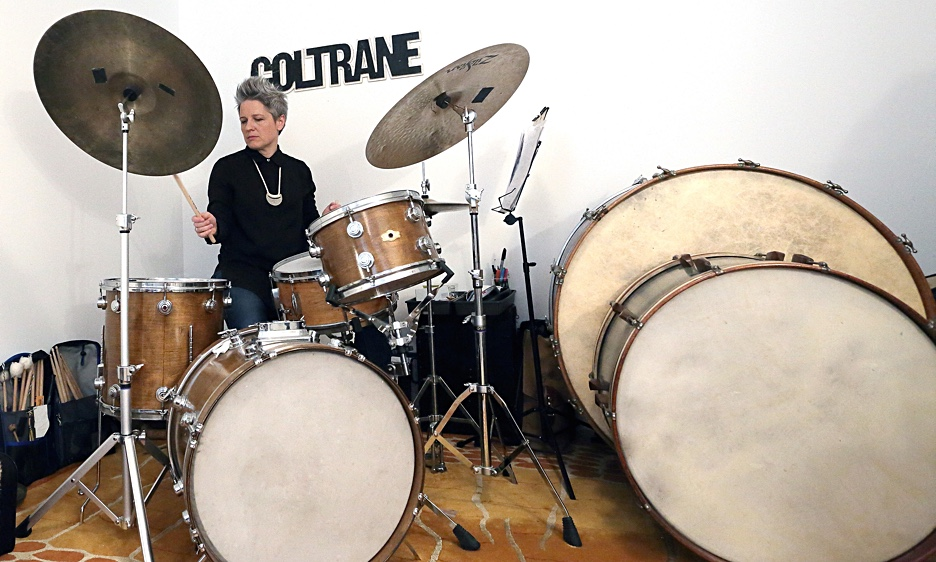 By John Pietaro
December 22, 2020
Sign in to view read count

Allison Miller sits at the vintage Camco drumkit in her Brooklyn home, playing post-bop over a rolling samba. Within the shimmer of an age-darkened cymbal, she switches from sticks to brushes, filling the room with the shush of summer rain, then a sudden hailstorm as her arms, aerial, traverse snare, tom-toms and cymbals in a blurring, but loving assault. Just a release of Covid fallout frustration? Maybe for some, but Miller remains unstoppable: this time also marks the rising of Artemis, the all-female supergroup taking hold of the greater jazz universe. Their debut album hit September 11 to unanimous critical acclaim.

A native of suburban Washington DC, Allison Miller began playing drums at age eight, answering an early calling. Her studies with noted DC-area teacher Walter Salb started during her adolescence, lasting years. "Walter was my first teacher. My mentor." Salb instilled in his young charge not only instruction but a marked degree of confidence, clarifying that gender had no place in judging one's abilities. Recognizing her talent, Salb began having the 12-year-old Miller sit in with his big band and began recommending her for gigs not long after. His impact has been lasting. "That's Walter right there," she states, pointing to the framed photo positioned just over her right shoulder. "And these," she adds, gazing pridefully at the classic '60s jazz kit, "are Walter's drums. They mean a lot to me. I won't take them on the road, but always use them for recording."

Other parts of the kit hold special memories for Miller as well. Lifting a Turkish K Zildjian from its stand, she offers: "This cymbal is named Darth. It belonged to (drummer and radio personality) Bud Spangler and he named it in the 1950s. He gave it to me after I used it on a record date, but I kept it in a closet as a keepsake. When he passed away, I felt the need to take it out of the closet (laughs). I came out of the closet years ago myself, so didn't want to leave Darth in there. It's the only ride cymbal I'll use now."

Miller moved to New York in the 1990s, but instead of descending upon the City's jazz scene with the expected vigor, she approached slowly. "The move was overwhelming. I was in my early 20s and suddenly in New York. I rarely spoke up and was fearful to even meet a hero like Elvin Jones or Tony Williams. And at jam sessions—the only way for a young jazz musician to truly learn—I felt like an outsider and had a hard time getting up there. It was male-driven and while some guys were welcoming, others were anything but. Some were always hitting on me, while others acted like they wanted my number for work, but then only called to ask me out! It's very disappointing when you are young and trying to be taken seriously, but absolutely overlooked."

Miller noted the absence of famous women drummers during her formative years, so finding female role models was often hard. "When I was a kid and bought Modern Drummer magazine, I'd flip through it just hoping to find an article, even an ad, with Sheila E. or Cindy Blackman or Terri Lynne Carrington. But the industry was barely including them." Even within the testosterone-driven atmosphere, Miller encountered leaders like Clark Terry whom she cited as historically supportive of women. "And Dr. Lonnie Smith mentored me on and off the bandstand, and there were more. Evolved musicians care about the music and the creative journey." She also played on Smith's Jungle Soul album (Palmetto Records, 2008).

Miller, however, found a wider assortment of the evolved within other circles. "Far too much of the jazz scene at the time was conservative, not open minded, and certainly not gay-friendly. It's sad because in earlier decades, artists of this wider genre we call jazz had been central to so much activism, civil rights, the fight for equality, to end wars. But in the mid-90s, it felt business focused," she recalled. Artists in rock and pop music were more welcoming and soon after, Miller was touring with songwriter and vocalist Natalie Merchant. "It felt right to be around musicians who are liberal-minded and involved in social causes." And the circle led to important work with Ani DiFranco and Brandi Carlile. In between tours and record dates, studies with Michael Carvin and Lenny White guided her further into the music and offered a deeper sense of self within it. Composing for and leading her own bands brought Miller to the attention of Marty Ehrlich, Toshi Reagon, Virginia Mayhew, Rachel Z, Jessica Lurie and Ben Allison, among others, with whom she has continued to perform and record.

"Melody is at the center of all I do. I really feed off of it and while I'm comping behind solos, I'm singing the melody in my head. It anchors the improvisation. And when I solo, I take all of the elements that I've heard during that performance and incorporate them. The drum set is a melodic instrument." Miller's own ensembles have been increasingly featured in an array of international festivals; Boom Tic Boom, founded twelve years ago and still thriving, surely must hold 'best name' props for a drummer-led group. The line-up isn't bad either: pianist Myra Melford, violinist Jenny Scheinman, cornetist Kirk Knuffke, clarinetist Ben Goldberg and bassist Todd Sickafoose are core players while trumpeter Steven Bernstein and cellist Erik Friedlander have done guest spots. She describes Boom Tic Boom as, "a complete mashup of all the music I love. I've been told its 'weird avant party music' and 'a mix of Klezmer, Bach and Blakey,' but I hate putting labels on music. As long as we are true to our creativity, we're accomplishing what matters." Their album Glitter Wolf (named for her young son) was released in 2019 as was Parlour Game, an offshoot project with Scheinman. Miller's also engaged in collectives including a duo with pianist Carmen Staaf. She's also composed music for Showtime's television program the L Word and stands among the artists of the eclectic Royal Potato Family label of Marco Benevento. "I put my compositions through the shiver test. If doesn't have an element that gives me shivers, it's not ready to go out into the world. It's the threshold for all I listen to and write." And somewhere within this range of this activity, Artemis came to be.

Founded in 2018, this multi-national, multi-generational septet of noted women musicians/composers/bandleaders is deemed a supergroup. According to musical director Renee Rosnes, the band's pianist, "We came together when a European promoter requested an all-female band. After the second tour in Europe, we chose to make this a regular band." Artemis features clarinetist Anat Cohen, tenor saxophonist Melissa Aldana, trumpeter Ingrid Jensen, bassist Noriko Ueda, and vocalist Cecile McLorin Salvant, in addition to Rosnes and Miller. "We are many voices as each member is also a composer," Rosnes explained. "The title speaks of the Goddess Artemis from Greek mythology. She was a huntress and the protector of children, a midwife, an explorer, the daughter of Zeus and the twin of Apollo. Ingrid Jenson conceived of the name; we agreed that this band's energies match that of this Goddess."

Though based on a model of solidarity and strength, the band's foray hasn't been without complication. Miller recalled: "Last year Artemis had a week-long engagement along with several other bands. The attendees were largely monied people, older conservative white men with quiet, unassuming wives. As the week went on, I was feeling really weighed down by the misogyny we experienced: the men's look of surprise when we played, the patronizing. They were saying things like 'Keep it up.' And their wives were so conditioned, they'd walk over and say, 'Wow, you're good.' I was feeling really dark by week's end. The business people are the real culprits. I would like to see more women represented in ALL jazz festivals. And I would love to see the language shift around initiatives to hire more women." Still, the band's eponymous debut on the celebrated Blue Note label has been received with nothing short of acclaim. Its single, "Goddess with the Hunt," was composed by Miller.

"Every woman knows sexism, every woman has dealt with it," the drummer stated. "But women are strong. We make human beings. And I love the comradery of recent years. When our country rejected a woman candidate and elected a man who has demonstrated so much misogyny in his life, that spoke volumes. We must stand together." Resultantly, Miller has become involved in WIJO, Women in Jazz Organization, founded by Roxy Coss. And as a means to influence the next generation, she also teaches at the New School. It's cherished activity. "Like Walter, Michael and Lennie, I want to give something back. It's important for young women but its also vital that men see all genders represented. The young generation of men in jazz are much more open minded and there are more young women that are incredible musicians; this concept just needs to become normalized."

As Miller looks back on the women who've made a marked impact on her, vocalist and guitarist Toshi Reagon comes to mind. "She embodies truth, activism through the power of spoken word and music, strength, integrity and a clarity in her artistic expression that is absolutely inspiring." In her growth as a musical artist, as an individual and activist, Miller incorporates multiple philosophies, seeking balance. She shares a home with life partner Rachel and the two are together raising a family. "Playing open-hearted is akin to living open-hearted. Seeking the balance to play open-hearted has been a focus. I'm left-handed but have been a rightie drummer for 35 years. Practicing lately with a left-handed lead allows me to reach down deep and find balance to play more natural to who I am. Not denying that part of who I am. For me, it's the same openness as coming out."