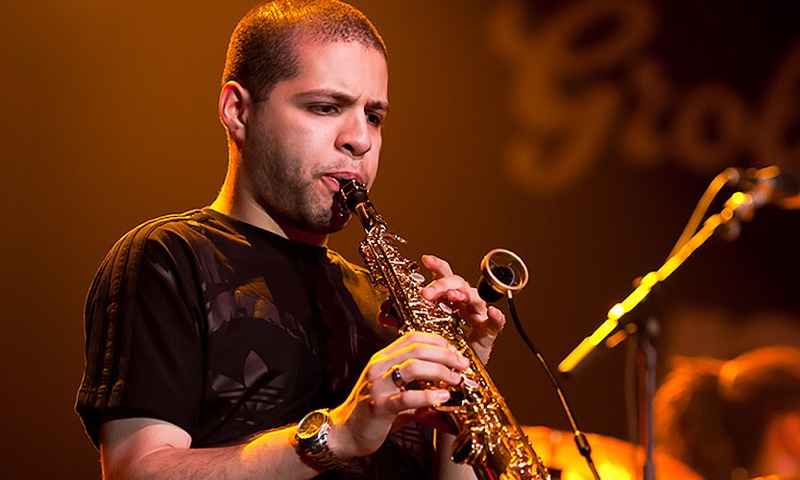 BY LIZ GOODWIN
October 4, 2017
Sign in to view read count
With a bold, invigorating, and adventurous sound, alto/soprano saxophonist and composer Alex Han is a sonic force on his debut CD, Spirit.

The project was produced by none other than the 2009 Berklee College of Music graduate's longtime employer and friend, the incomparable Grammy-Award winning electric bassist/bass clarinetist/producer/composer Marcus Miller for Miller's own label, 3 Deuces. Han is a stellar member of Miller's band, has appeared on several of his albums, and continues to tour extensively with the electric bass ambassador.

Consisting of ten tunes: seven brilliantly imaginative Han originals; one cover tune, the wistful hit "Fragile," by Sting; the heartfelt, meditative title track, penned specifically for Han by Miller; and the buoyant and jubilant "The Jungle Way Out," composed by bassist Yohannes Tona, Spirit is an album that showcases Han's versatility and relentless superior musicianship. Han explained his enlightening recording experience during a phone interview from his New York City home during July 2017. "It's been a labor of love, four years in the making," he proudly attests. I'm glad it's finally out. As with anyone's album, there have been some difficulties in one way or another because it has been a labor of love. Otherwise, if there's no struggle then maybe there's no story there."

There are several stories to support the making of the record, many of which aided the reedman in becoming wise to the behind the scenes nature of the recording process.

"I had demos of the tunes myself but they sounded a little too much on the electronic side," he recalls, sounding like a sagacious veteran already.

"At first Marcus was like, 'it sounds cool, but we need to re-do the demos and get them to sound more down-to- earth.'"

Adding to the earthy vibe of Spirit, are the stellar piano contributions of Federico Pena, a heavily in-demand keyboardist, who has been a frequent member of Miller's band. Pena always can be relied upon for his lyrical, sensitive approach to the instrument֫—a fact not lost on the conscientious, detail-oriented Han. The saxophone ace injects the same ingredients into his own intensely personal sound.

"One major element that you heard on the tunes is the piano," Han reflects. We had some issues with the piano from the first recording session. The piano was going out of tune and caused some phasing issues, so when we did our second recording session, Federico redid the piano parts on a really, really nice Steinway. He did an amazing job and sounded like he recorded the piano live with us (the other band members). That was done after the fact—after all of the other work had been initially laid down."

In addition to Pena, Miller, and Han laying down the groove, they are joined by bassist James Genus ; percussionist Mino Cinelu; drummers Corey Fonville; Louis Cato, and Sean Rickman; and guitarist Adam Agati; to name just a few of the gifted artists.

Han, a music prodigy (he's played saxophone since he was eight years old) who grew up in Tenafly, N.J. before moving with his family in his teens to Scottsdale, Arizona, displays his facility for writing strong, memorable melodies such as the head-bobbing opener "Behold," the rhythmic and percolating "Osasia" (his play on the words oasis and pop vocalist sensation's name Basia—and also so named as it was inspired by his visit to the island of Aruba); the sleeky, funky "Spectre," which features a scorching guitar solo by Agati and is punctuated by Miller's stinging electric bass stabs ( as also heard on the celebratory "Covenant"). Han plays a beautiful, tender soprano sax on the ballad "Mowgli," on which, though he has his own distinctive approach, he sounds a bit like saxophone powerhouse Branford Marsalis. True to his unwavering faith in God, he wrote the beautiful, ethereal, hypnotic closer, "Voice of The King" as his tribute to God.

He lovingly credits his parents (who were fans of saxophone masters David Sanborn and Nelson Rangell) for making certain that he took music lessons as a child, rather than, as he jokingly but truthfully puts it, "just consume junk food, play video games, watch tv, and ride my bike." His parents' investment into their son's musical enrichment has paid off indubitably.

"My parents are great, he exclaims. They bought me instruments and made certain that I took private lessons. I really am so blessed to have them," he says affectionately.

Han also has great esteem, of course, for Miller.

"There's a lot that I've learned from Marcus, in terms of how to conduct business and how to really engage with your bandmates. One of the best things that I've ever seen is just how efficient Marcus is with how he conducts business and how well-mannered he is when he is conducting rehearsals and dealing with different kinds of music and different kinds of music personalities—whatever it may be. He knows how to get things done," he says emphatically. He is extremely generous and thoughtful. I mean, he's working like a mad dog and he's got like, 20 million things that he has to handle, but he remains very generous. He's become like a second father to me, and his wife, Brenda, has been like a second mother to me."

Han grew up listening to Michael Jackson, vocal superstar Peter Cetera, former lead singer of the hit rock group Chicago, and Disney Movie soundtracks long before falling in love with not only the music of saxophone legends Cannonball Adderley; Charlie Parker; Benny Carter; and Paquito D'Rivera, (a great friend), but also more recent talents such as saxmen Kenny Garrett; Marcus Strickland; Chris Potter; and Michael Brecker, to name just a few. But once the jazz bug bit, he was smitten. It is exactly this eclecticism that informs the equally diverse rhythms and pulse of Spirit.

"When it came to this music, I wanted this to be the kind of album that would be accessible to people so that they could appreciate it and give instrumental music a chance, without getting too cerebral with it," he says, sounding understandably concerned about the overall public's perception of its ever-changing definition and concept of jazz.

"I didn't want to get too cerebral with it because a lot of jazz, as we know, is brilliant to those who understand it but not everybody understands it, so I wanted to give it some depth and obviously show some technical ability—those were sort of the two elements that I was balancing. I wanted to show and play jazz music that can bring about some good feeling and emotion, but also engage you from a more technical standpoint. There can be some really cool stuff in all kinds of music but sometimes you can lose people. I think that I found a happy balance with this album."

Ever thoughtful and committed to his faith his God, Han is adamant about his belief that there is more to music than just the music itself—a point of view that is never out of focus from his spiritual lens.

"For me, as an artist, he asserts, "it's important to show that there's something above our heads, that is, God. There's a higher order and a higher structure of things that allows us to experience something as wonderful as music. Music doesn't just come from nothingness, you know, it comes from a source, as does everything. It's not just random chance. Hopefully, my music gives some way of reminding people that there is something above our heads. And I hope to express this sentiment for future albums to come."