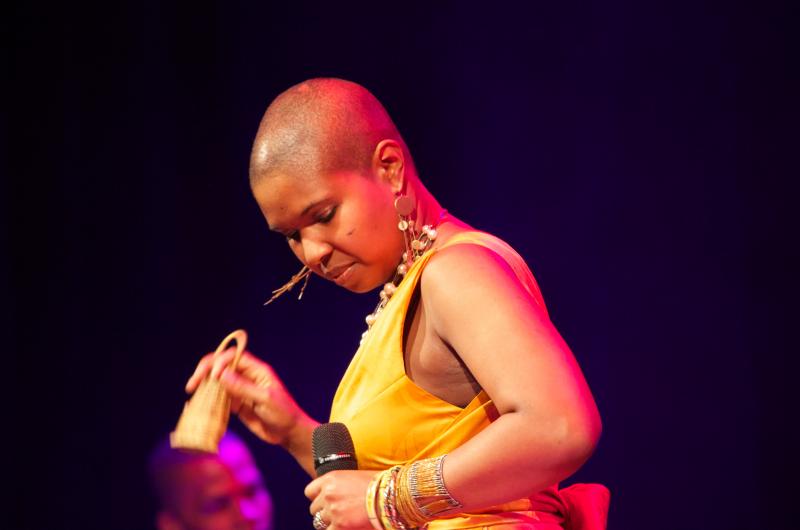 By Franz A. Matzner
February 19, 2013
Sign in to view read count
Local star Akua Allrich continued her rapid rise this month performing music from her latest album Uniquely Standard (Self Produced, 2012) at the historic Howard Theater on Washington, DC's U Street.

An accomplished vocalist whose vibrant performances and inviting stage presence have built a loyal following and propelled her to the forefront of Washington, DC's main jazz venues, Allrich's rise in many ways parallels the resurgence of Washington, DC as a major jazz city, making her debut at the recently reopened Howard Theater both a fitting and symbolically resonant accomplishment.

Just five years ago, Allrich was only beginning to return to the stage after having originally set music aside when she graduated Howard University to raise a family and begin a teaching career. Unable to ignore her inner drive, she started to work the local scene. Not so long ago, DC was the city jazz artists skipped on their way across country. Precious few clubs still operated and only the Kennedy Center, and possibly Blues Alley in Georgetown, regularly drew national names. Then the economy shifted, a citywide urban revival began, and DC started to reclaim its jazz heritage. Bohemian Caverns reestablished itself, booking major local and national talent; the DC Jazz Festival began; restaurants and bars all along U Street and elsewhere started hosting jazz players; new venues like the Hamilton Restaurant opened their doors; the famous Atlas Theater on H Street started a rejuvenated jazz series; and, in 2012, the historic Howard Theater reopened its doors, quickly attracting headline acts like McCoy Tyner, Chaka Khan, and José James.

Established in 1910, the Howard Theater was long an anchor of the African-American performing arts scene, hosting the nation's premier musical, dramatic, and comedy performers until, like many other victims of the post-Martin Luther King assassination riots, it began to struggle, eventually closing permanently in 1980 despite having been designated a National Historic Preservation site. Opened again in 2012, the Howard is rapidly regaining its former prestige, attracting a variety of top musical acts. From a jazz perspective, the Howard's history includes a litany of jazz greats such as Duke Ellington, Cab Calloway, Ethel Waters, Ella Fitzgerald and Nina Simone. (According to some, Fitzgerald actually got her start at a Howard Theater amateur contest).

For Allrich, a proud DC native and staunch student of history, playing at the Howard held particular significance:

"Growing up in Northwest DC, I used to ride past the dilapidated houses and buildings every day. But the Howard building was the one building that seemed to catch my heart and speak to my spirit; it felt like a royal place. I would dream of performing at the Howard. The spirit of the place has been with me ever since. So, to be a DC musician and to have the privilege of headlining there...I can't even fully express that fulfillment. It brought tears to my eyes. It was all together a surreal and magical night."

This powerful sense of connection and fulfillment was reflected in the night's rousing series of tunes, which Allrich interwove with allusions to Howard's lineage.

After a strong opening of "Afro Blue," on which her band adeptly layered multiple African- tinged rhythms behind her the vocals, Allrich turned to a faithful version of Simone's "Don't Let Me be Misunderstood," followed by a delightfully tongue-in-cheek "My Baby Just Cares for Me." Next was an original ballad, "Wishful Thinking," which Allrich used to showcase her R&B-influenced talents. Allrich then dove into a richly arranged version of Ella Fitzgerald's "Black Coffee." A standout moment, the band hit full stride with this piece, taking full advantage of bassist Kris Funn's funky blues lines and the tune's sharp lyrics to deliver an insightful, modern reading of the original. The tune also highlighted Allrich's growing scat abilities and her capacity to occupy each song thoroughly, from her tone of voice to her body language.

The band returned then to Allrich's recurrent dual inspirations, Nina Simone and Miriam Makeba, for "Jol'Inkomo," 'Sinnerman," and a crowd-interactive closing from her 2010 debut Album, Peace of Mind (Self Produced), "Fire/Sea Lion Woman." This last had the Wednesday night crowd standing and joining with Allrich in multiple rounds of enthusiastic call-and-response, while the band let loose, especially percussionist Jabari Exum on djembe.

Amidst clapping hands and shouts of encore from the now-sparse but delighted Wednesday night crowd, the band started packing up to leave. After some gentle coaxing, a clearly beaming Allrich returned to the mike and delivered the surprise of the night: an ingeniously rendered version of Simone's "Baltimore." Rearranged into a thoroughly modern R&B ballad, Allrich's political bent and insightful interpretation leveraged Simone's pointed lyrics into a poignant and contemporary reminder of the progress still needed to heal the social and economic inequities that Simone depicted and that sadly still exist 40 years later. This departure from the usual upbeat "burner" encore underscored Allrich's unusual talents and approach. Her choice to conclude the evening with a bittersweet moment lingered in the mind on the return home, drawing one's eyes to the empty streets and parts of the city still untouched by Washington's economic rise.

A stellar debut for Allrich, the night was also a reminder that on any given night if you find yourself in the right place and listen closely, moments of beauty and powerful self- expression are there to be found.