Vocalist and actress Ethel Waters was a key figure in the development of African American culture between the two World Wars. She broke barrier after barrier, becoming the first black woman heard on the radio, the first black singer to perform on television, the first African American to perform in an integrated cast on Broadway, and the first black woman to perform in a lead dramatic role on Broadway. As a singer Waters introduced over 50 songs that became hits, including standards of the magnitude of "St. Louis Blues" and "Stormy Weather." Her jazzy yet controlled vocal style influenced a generation of vocalists, black and white, and her career, encompassing stage, song, and screen, flowered several times in comebacks after tumbling to low points. Born October 31, 1896, in Chester, Pennsylvania, she had to overcome the squalor of her sordid childhood and early struggles 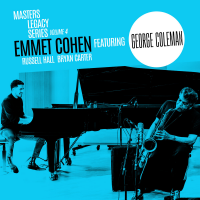 So here we are, nearly knocking on the door to February 2020, and we're listening to the second of Emmet Cohen's two entrancing, late 2019 releases: Masters Legacy Series Vol. 4 Emmet Cohen featuring George Coleman--a good harbinger for the new year. And heaven knows we could use a boatload of good harbingers these exhausting days. ...

In the last hour, we heard Count Basie emerge as an exciting new voice from Kansas City. In this hour, we return to New York to follow Duke Ellington's innovative path through the 1930s as he experiments with longer musical forms while building one of his greatest bands featuring tenor player Ben Webster and bassist Jimmy ...

This article was first published at the Encyclopedia of Greater Philadelphia website. Jazz began to emerge as a distinct musical style around the turn of the twentieth century, a merging of two vernacular African American musical styles—ragtime and blues—with elements of popular music. New Orleans, the “cradle of jazz," was the most important city ...