By Troy Collins
February 19, 2013
Sign in to view read count 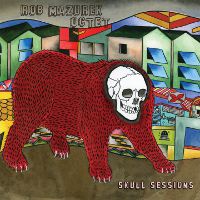 The shadow of Miles Davis continues to influence the efforts of generations of jazz musicians, especially fellow trumpeters. Davis' myriad innovations span multiple styles and time periods, making it virtually impossible to ignore his achievements. Yet when the We Want Miles exhibition in São Paulo, Brazil asked former resident Rob Mazurek to devise a presentation inspired by his affinity for the Dark Prince's art, the notoriously individualistic cornetist decided to create new music for the event, rather than revisit the master's illustrious oeuvre.

Currently residing in Chicago after an eight-year stint in São Paulo, Mazurek recruited an international cast of musicians from North and South America for this expansive project, primarily drawing personnel from two of his most dynamic ensembles. Flautist Nicole Mitchell, vibraphonist Jason Adasiewicz and drummer John Herndon are key members of Mazurek's Windy City-based Exploding Star Orchestra. Hailing from south of the equator are percussionist and cavaquinho (Brazilian ukulele) player Mauricio Takara and keyboardist Guilherme Granado, co-founders of Sao Paulo Underground with Mazurek, while guitarist Carlos Issa and Swiss expatriate Thomas Rohrer on rabeca (Brazilian viola) and C melody saxophone, round out the octet featured on Skull Sessions.

Emblematic of his collaborative worldview, Mazurek encourages adventurous collective improvisation through the use of spacious structures that eschew conventional forms designed simply to showcase the virtuosity of individual soloists. Although the ensuing latticework of kaleidoscopic textures, rhapsodic harmonies and roiling polyrhythms recalls the dramatic polyphony of Davis' late fusion period, the band's hypnotic, multi-layered expressionism also evokes the cosmic explorations of Sun Ra and his New Thing-era brethren.

Emboldened by spirited performances, the group's masterful electro-acoustic fusion of folksy timbres and futuristic tones unveils a fascinating variety of multihued detail with repeated spins. Rapturous and sublime, Skull Sessions is a captivating offering from Mazurek and company that embodies both the primal and urbane in equal measure.