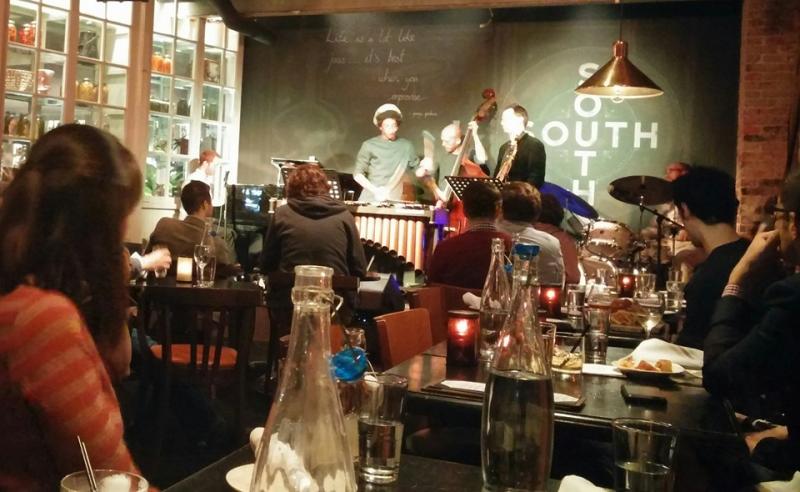 I apologize in advance if the following descriptions come off as grandiose. But regarding the Aaron Parks Group, anything that doesn't walk the line of hyperbole feels like an undersell. They were one of the most exciting acts I've had the pleasure of witnessing, and I don't mean interesting or hope inspiring, but rather the type of excitement you feel after injecting a shot of adrenaline straight into your bloodstream. By the end of their gripping 75-minute set it felt like only a half hour had passed.

Aaron Parks is difficult to put a finger on because his signature traits as a pianist and improviser are overshadowed by the incredible stylistic diversity of his genre-wandering career. His most recent release, Groovements (Stunt Records), is a modern spin on the straight-ahead, easy-swinging piano trio format, but he has explored terrain from Rock Fusion to the avant-garde edges of Post-Bop. Parks came to notoriety in 2008 with his Blue Note debut, Invisible Cinema, an acoustic fusion record flaunting the groove-based hipness that is now standard for the label. Blue Note dropped him during the economic crisis, but in 2013 he rebounded with the Jarrett-esque solo ECM album, Arborescence, (a fair right of passage for any former child-prodigy who wants to be taken seriously as a grown artist.) Overall, his playing is marked by lyricism, cinematic drama, and dynamic control.

During the concert, Parks' Blue Note catchiness and his ECM experimentalism coalesced into a bold flavor of Post-Bop that alluded to contemporary styles while still evoking its roots in Hard-Bop and Swing. The group was modern and intellectually stimulating with regard to harmony, rhythm, and song-form, but this cerebral edge paled in comparison to their utter nastiness. The five musicians swung with levels of passion, cohesion and flare that their discographies don't begin to reflect.

Joining Parks' current working band of Matt Brewer, Anwar Marshall, and John Ellis, on bass, drums, and tenor, respectively, was 21-year-old vibraphonist Joel Ross, who is currently touring with Parks in a mentorship program sponsored by The Jazz Gallery. It's unsurprising that the pianist would accept a mentee, given the degree to which his own musical development was catalyzed by his involvement with Terence Blanchard at the ripe age of 19.

But Ross' precocious creativity, facility, and confidence were downright shocking. His style is so unique and developed that it changed my image of the vibraphone itself. Though his musicality shown through brightly, I was most impressed by the revolutionary way in which he approached the physicality of the instrument, reworking classic limitations as creative allowances. In contrast to the metallic sustain of players like Gary Burton, Ross' tone was brittle, percussive and woody; instead of letting his notes ring out and wash over each other indefinitely he exploited the relatively sharp decay of each hit. This allowed him to throw down precise flurries while sounding neither muddy nor blunted. In an introduction to Sonny Rollins' "Airegin," he joined Parks in a flirtatious duet, answering the pianist's Monk-like, staccato lines (think "Trinkle, Tinkle") with equally speedy riffs of his own.

On Kurt Rosenwinkel's "A Life Unfolds," Ross showed taste and restraint in addition to his rabid displays of virtuosity. Parks waded into the tune with the billowing romanticism of a Chopin interpreter, humming along to himself as if ten keyboard voices weren't enough. The vibraphonist patiently sprinkled accents throughout before developing a delicate, transfixing solo. Ross' impeccable timing, combined with the timbral uniformity of each hit, made his swift patterns seem surreally computerized, like the digital pattering of rain. Throughout the display Ellis held an expression like he'd just gotten slapped in the face.

It was the type of solo that seemed impossible to follow, but Parks and Marshall tackled it together, trading licks and egging each other on. Marshall's overall performance was staggering—certainly in the same league as Parks' go-to drummer, Eric Harland (though with noticeably less restraint.) He reached his climax on a heavy-hitting rendition of Mark Turner's "Sonnet For Stevie" that the band cast in shades of Mingus. Marshall's cymbal-heavy fills drowned the stage in a frenzied wash of treble, with snare hits escaping from underneath. Instead of winding down at the end of his solo, he settled in to the beat he had built up to, cueing the band to return with a heightened level of urgency (a move favored by Marcus Gilmore with the Vijay Iyer Trio.)

That being said, Marshall was equally impressive in a supportive role. His unswung accuracy and liberal use of triplets made each groove feel like a computerized beat come to life. He brought out the Hip-Hop undertones even further by adopting a focused swagger, pulling off subtle pyrotechnics with the casualness of a swing drummer keeping time. I was most struck by Marshall's use of the drum set's dynamic range. He would not only switch between light and heavy grooves, but also mold the intensity of each hit within a phrase, using timbre and dynamics the way a tonal instrument uses pitch, and thus adding a whole new dimension to the expressive potential of his instrument.

Ellis shone on his own composition, "Little Giggles." On his 2006 record By A Thread the smooth tune comes off rather empty, like a Sunday morning NPR interlude, but the Aaron Parks Group rocked it with such gusto that it felt joyous and triumphant instead. Ellis solos in the school of Coltrane, rapidly slipping around sharp melodic curves with the ease and fluency of step-wise motion, and often ending phrases with a melodic hook downward. In the vein of Eric Dolphy, he also favored legato runs, in which he squeaked and groaned out as many pitches as possible before stopping to breathe.

Parks himself was also a formidable soloist, but the group's excellence came mainly from its cohesion. Groove-centric jazz sometimes feels stoic and mechanical because even if the soloist has free rein the rhythm section is often locked down to a specific pattern. The Aaron Parks Group, however, demonstrated the ability to spontaneously slip into new grooves. In these moments of collective discovery they acted with chameleonic flexibility while preserving the overarching feel and character of the song.

Crafting a sound that was instantly gratifying yet rife for critical listening, this current iteration of the Aaron Parks Group meshed better than any of his other ensembles on record. Being of the generation accustomed to universal access, I've been frustrated by my inability to find an online recording of the group. The only way to experience this fierce, mesmerizing band is to see them in person, and if you come in skeptical (as I did) you may very well be a fan by the end.