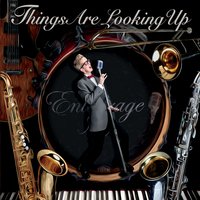 Even with interest in the genre waning, most decent-sized cities are home to one or more local jazz groups, which vary in size, membership, temperament and ability. Entourage, formed in 2007, is an Albuquerque, New Mexico-based quintet led by vocalist Emerson Susan Corley whose core group has been enlarged to as many as fifteen for its third recording, Things Are Looking Up. The album embodies a dozen selections, on nine of which Corley sings; the other three are capably overseen by a nonet (three reeds, two trumpets, trombone and rhythm).

The classically-trained Corley isn't a jazz singer in the sense that one would label, say, Ella Fitzgerald, Sarah Vaughan or Carmen McRae as such. There is more cabaret / recital hall than jazz in her plain-spoken phrases, delivered in a clear if less than full-bodied voice with a minimum of embroidery. To her credit, Corley has surrounded herself with seasoned jazz musicians, which lends the enterprise a certain rhythmic and harmonic vitality, as do the splendid charts by pianist Roger Baker (whose lone misstep, to these ears, is a tad-too-leisurely tempo on the Harry Warren / Johnny Mercer standard "Jeepers Creepers").

Speaking of standards, Corley cleaves for the most part to the Great American Songbook, whereas the instrumentals were written by jazz musicians: Cedar Walton ("Firm Roots"), George Cables ("Mr. Baggy Pants"), Ronnie Cuber ("Waltz for Geraldus") and arranged by alto saxophonist Sam Reid. The exceptions to Corley's decorous itinerary are Dave Frishberg / Bob Dorough's "I'm Hip" and a couple of seldom-heard gems from the Gershwin brothers, "You've Got What Gets Me" (from the 1932 film Girl Crazy) and especially "Things Are Looking Up," written for the 1937 Astaire / Rogers film A Damsel in Distress. As a bonus, Corley sings its even-more unfamiliar verse. While Entourage embodies a number of capable soloists, especially saxophonist Lee Taylor, their statements are by and large brief and unassuming.

As noted, most well-populated cities boast groups such as Entourage, hard-working and reasonably talented ensembles that may not be destined to earn wider acclaim but help keep the jazz flame burning brightly in their corner of the world. Each of them, regardless of its measure of expertise, deserves encouragement and support. Let us hope that, as its title suggests, Things Are Looking Up for Entourage and similar groups in cities and towns across the country.

I’ve Got the World on a String; I’m Hip; Darn That Dream; Firm Roots; Destination Moon; Walkin’ My Baby Back Home; Jeepers Creepers; You’ve Got What Gets Me; Mr. Baggy Pants; The Summer Knows; Things Are Looking Up; Waltz for Geraldus.