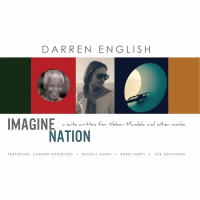 South African trumpeter Darren English (now living in Atlanta) makes an impressive debut on Imagine Nation, a mix of originals and standards. The album's centerpiece is formed by three compositions that are part of a suite paying tribute to freedom fighter Nelson Mandela. The title tune opens the album, an anthemic piece played by English with the core group of pianist Kenny Banks, bassist Billy Thornton, and drummer Chris Burroughs. English makes an immediate impression, as a composer and a bravura soloist, paired with a strong band. On the other two parts ("Pledge for Peace," which features quotes from a recorded interview with Mandela, and "The Birth") saxophonist Greg Tardy augments the group. "The Birth" is an especially impressive track, as it builds to a climax over almost 12 minutes, and includes a powerful solo from Tardy. Tardy also appears on the other English original, "Bullet In The Gunn," which pays tribute to English's mentor, trumpeter Russell Gunn.

The rest of the program is devoted to standards—and very commonly performed selections, at that—all impeccably performed, but fairly straight-ahead. "Body and Soul" begins with arco bass and English playing without a mouthpiece, which sets a late night mood. Vocalist Carmen Bradford is featured on "What a Little Moonlight Can Do" and "Skylark," both beautiful, spirited performances. "I've Never Been in Love Before" swings very effectively even with the drums sitting out. Bebop is well served by Dizzy Gillespie's "Bebop" and "Cherokee," a fast jam session staple which finds Gunn in the company of fellow trumpeters Russell Gunn and Joe Gransden's Big Band.

The set certainly demonstrates English's chops and versatility: he can clearly play effectively in a range of jazz contexts. It's a shame that the original material wasn't more of a focus. I would really like to hear the entire Mandela suite. And an album of all new tunes would better establish English's individual voice. It will be interesting to see what direction his sophomore recording will take.