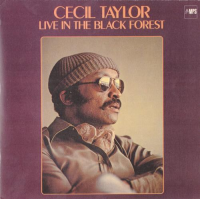 A retrospective look at the sixty-year career of Cecil Taylor, in progress at the Whitney Museum of American Art, incorporates the museum's unobstructed spaces and impressive views of New York City with multimedia documentation of the great composer/pianist's sixty years of creative invention. That openness is emblematic of Taylor's own absence of artistic boundaries. He has worked with dancers, poets, filmmakers and playwrights all while creating the most innovative avant-garde music that modern jazz has to offer. Throughout his career he has been the author of arguably the most challenging free jazz produced, some of which is incomprehensible to an average listener, but still, his music is impossible to ignore.

Live in the Black Forest was originally released in 1978 on the MPS label. The live album consists of two, twenty-five minute pieces that had been recorded earlier that year for a German radio station but had never before been released in a digital format. The German label, Edel, acquired the tapes and the quality of this recording is excellent. Though they were not yet billed as such, the sextet here would later be known as the "Cecil Taylor New Unit" and included trumpeter Raphe Malik, Jimmy Lyons on alto saxophone, Ramsey Ameen on violin, bassist Sirone (Norris Jones) and drummer Ronald Shannon Jackson. This collective, however, was short lived and the earlier ..."Unit," a highly regarded version of the ensemble that appeared on Unit Structures (Blue Note, 1966), included only Lyons from this group.

"The Eel Pot" is harmonically unimpeded creativeness and demonstrates why Taylor favored his long association with Lyons who immerses himself in this dynamic improvisation with the acrobatic skill necessary for a live collaboration with Taylor. Malik's commanding, vibrato flashes are a preternatural mélange of warmth and unruliness punctuating Taylor's snippets of melody and torrents of notes. "Sperichill On Calling" opens with a briefly melodic piano solo joined by Lyons for a bluesy into to an intense collective jam. Jackson aggressively precipitates frantically fast paced hyper-activity that briefly slows with Ameen's searching solo. He and Taylor command the remaining ten minutes of the performance as the piece shifts in tempo, Lyons and Malik and Sirone abruptly moving in and out of focus.

Even among his fan base, Taylor has been the quintessential riddle wrapped in an enigma. His music is dense and sometimes overwhelming and though Live in the Black Forest is sometimes cited as a more accessible Taylor primer, it is no less complex than the body of his work. Taylor has always had critical detractors but often for no more than the irritating inability to explain his music. Live in the Black Forest is for Taylor fans, particularly those who favor the pianist outside his preferred solo formation. Like most everything Taylor has recorded, this once hard-to-find recording requires patience and open ears.

The Eel Pot; Sperichill On Calling.