By C. Michael Bailey
December 21, 2009
Sign in to view read count
It is easy to be cynical about holiday music. On the mainstream popular music front, these releases are often nakedly commercial, marketed with a fixed (and very large) target population in mind. And a good many of such recordings are truly bad. In the run up to Christmas 2009, the marketplace is clotted with a legion of the musical equivalent of cholesteric plaque, restricting the ability of the best recordings to reveal themselves.

While jazz and classical musics are not immune to capitalistic enterprise, they do resist it by being outside the pop music realm. It is the difference between pop culture and high art. The former is to be consumed and the latter, considered and savored. With jazz holiday releases, some years are all chickens and some all feathers. 2009 is all chickens. There have been fine seasonal releases this year and none finer than those discussed here. 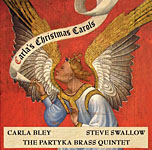 Has there been a better jazz arranger than Gil Evans in the past 50 years? Well, yes there is and she's Carla Bley. That Bley has gotten around to scoring popular holiday classics may be a surprise, but think about it...what could be more challenging to a master than taking on such a politically, spiritually and culturally charged canon as Christmas music. Bley is undaunted and delivers the most memorable holiday collection since Wynton Marsalis' A Crescent City Christmas Card (Columbia, 1989).

Bley and bassist Steve Swallow are joined by the Partyka Brass Quintet, bringing the ensemble size to a septet. Bley's past recordings have revealed a fondness for low brass in the arrangements. Here Bley shows herself equally adept at scoring the higher brass as well as meeting the challenge of doing so for a smaller ensemble. While this is patently jazz, it is also a very high form of chamber music, all elements of which are under Bley's careful control.

Bley boldly arranges the most mainstream of holiday songs. "O Tannenbaum" is revealed as a Bach Christmas Choral with a Thelonious Monk sense of humor. "Away In The Manger" makes a Philip Glass use of the celeste to infer a slightly anxious lullaby, while Swallow performs the melody and improvisation sweetly on his five-string electric bass. "Ring Christmas Bells" is based on "Carol Of The Bells" and features a handy trombone solo by Adrian Meers, backed by the remainder of the Partyka Brass Quintet, who channel Oliver Nelson at his soundtrack best.

"God Rest Ye Merry Gentlemen" gets a lengthy two-part treatment replete with looping figures and a hypnotic vibe reminiscent of saxophonist John Coltrane. "It Came Upon A Midnight Clear" has the same arrangement, one conducive to improvisation, but never straying far from Bley's specific desires. "Hells Bells" adds a bit of Dixieland meets Star Wars with Swallow's swinging bass pushing the envelope for Axel Schlosser's blistering trumpet solo. Bley shows off her piano chops in a measured tribute to Basie. Carla's Christmas Carols is not only the best holiday offering of 2009, it belongs on end-of-the-year lists.

Visit Carla Bley on the web.

Trumpeter Wynton Marsalis' A Crescent City Christmas Card was released in 1989. Now, 20 years later on the dot, appears Christmas Jazz Jam. Marsalis produced this new recording with a septet plus four composed of many former sidemen, including trombonist Wycliffe Gordon, uber-reedsmen Victor Goines and Wessell Anderson, drummer Herlin Riley, and bassist Reginald Veal, and several newer faces. Marsalis has also opted for a newer marketing scheme by selling the disc exclusively through Target Stores. This commercial decision might be frowned upon were it not for the excellence of the recording.

Make no mistake about it: like A Crescent City Christmas Card, Christmas Jazz Jam is a quintessential Marsalis recording, teeming with his native New Orleans, his reverence for prewar small ensemble jazz, and his creative and ubiquitous sense of humor. In recent years, Marsalis has started to shed the early jazz worship cloak that had collared many early releases. What emerges here is a full-bore talent fun-fest that is both fun and instructive.

Marsalis reprises few carols from Crescent City. Those that he does ("Jingle Bells" and "O Christmas Tree") are dramatically rearranged and while the vocal songs are not repeated, counter parts exist on each disc. Crescent City's sultry "Silent Night," sung by Kathleen Battle becomes a rollicking "Mary Had A Baby" by Roberta Gumbel on Christmas Jazz Jam. Likewise the former's scat-fest "Sleighride" by Jon Hendricks becomes a Vieux Carre "Blue Christmas" by Don Vappie on the latter.

"Jingle Bells" channels cornet legend King Oliver and clarinetist Johnny Dodds through Marsalis and the supremely talented Goines. "Go Tell It On The Mountain" is a rave up where Don Vappie show the importance of the banjo in jazz. The first part of the spiritual is taken at a fast clip where Gordon delivers his trombone solo with exuberant abandon. Gordon then changes to tuba, slowing the song to a march. He proceeds to perform a svelte tuba solo with a smile as big as trumpeter Louis Armstrong's. Wessell Anderson blows a mean alto, too.

Finally, the man of the hour, Wynton Marsalis, gives a clinic on every trumpet style from Buddy Bolden to Miles Davis. His arrangements and band- leading are without peer, making Christmas Jazz Jam a grand book end to A Crescent City Christmas Card.

Visit Wynton Marsalis on the web.

On the first collection, Trio West provided two competing versions of "The Little Drummer Boy." The band extends this on Vol. 2, going so far as to title the performances differently. "We Three Kings" is given a straight and Coltrane's "My Favorite Things" a waltz treatment. Likewise for "Joy To The World" which is rolled as a Tito Puente samba. "O Tannenbaum" is presented as a Horace Silver hard bop ("Funk") and a Chico O'Farrill Latin tinge ("Salsa"). These different performances offer contrasting visions of arranging and show off the excellent musicianship of the trio.

Trio West's holiday offerings provide that extremely cool brand of piano trio jazz that is archetypal of the genre. Both discs, but Vol. 2 more so, illustrate the breadth of jazz performance, existing as education pieces to the enjoyed. When was the last time you learned so much from something so fun?

Visit Trio West on the web.