By Dan McClenaghan
December 21, 2009
Sign in to view read count 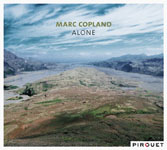 With solo piano, the pure essence of the musician's artistry is revealed. In the case of Marc Copland's Alone, that revelation is enthralling.

Copland has risen to the lightly populated top tier of jazz pianists on the strength of his three profile-boosting New York Trio albums, with shifting line-ups including bassists Gary Peacock and Drew Gress, and drummers Paul Motian and Bill Stewart. Copland's style is characterized by an inward feel, an obliqueness—especially on his original tunes—and a complexity that, rather than falling into the overly intellectual or off-putting, is instead oddly enchanting and always beautiful.

Alone opens with Mal Waldron's "Soul Eyes." The pianist has a special genius for going deep and revealing new facets of familiar tunes, whether it's Miles Davis' "All Blues," which Copland covered on both Voices (2007) and Insight (2009), or "Taking a Chance On Love," from Modhinha (2006), all on Pirouet Records. Copland explores the melodic nuances of these gems, buffing them up with an alluring harmonic shine, and he is no less adept when playing solo, with the Waldron classic here, along with the Sammy Cahn/Axel Stordahl/Paul Weston tune "I Should Care" and Wayne Shorter's "Fall."

The surprise of Copland's ongoing journey of discovery with Alone's non-originals is his inclusion of three Joni Mitchell tunes, not from her "hits" catalog, (it's hard to imagine the pianist covering "Big Yellow Taxi"), but some of the Canadian songstress' lesser-known jewels. Like Copland, Mitchell's artistry has always had a cerebral accessibility, rising well above the run-of-the-mill in her milieu. "I Don't Know Where I Stand," "Rainy Night House," and "Michael From Mountains" are culled from Mitchell's late-sixties, early-seventies peak of popularity. Copland's exploration of the poetry and off-kilter sophistication of Mitchell's musical world is mesmerizing.

Alone is a beginning-to-end gorgeous work of art, solo piano at its highest level.