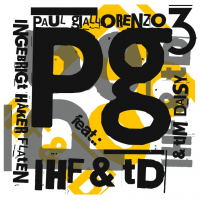 The Paul Giallorenzo Trio with Norwegian bassist Ingebrigt Håker Flaten and drummer Tim Daisy recorded this Chicago session in 2007. Since then, individual members have joined other bands and associations, but this disc documents a short lived yet musically significant project.

Giallorenzo has previously released the quintet sessionGet In To Go Out (482 Music, 2009) and he also plays in electric/acoustic improvised settings in Chicago.

Employing the standard piano trio format, Giallorenzo's compositions bounce between composed melodies and improvised freedom. His left hand often playing the trickster, that is when it isn't tracked by his right. The music smudges the lines between the tradition and the avant-garde. After Flaten and Daisy open the disc with the bluesy walk—"All Together Now," the pianist takes an Oscar Peterson stroll before (about the 3 minute mark) breaking the music apart with his two-handed attack. Daisy and Flaten respond, swiftly and smartly. This mini-maelstrom lasts until the blues is reestablished by the bassist. That signature sound, of threatened chaos and assured preservation percolates throughout.

The music can start as a Keith Jarrett introspective wandering—"Interlockin," and progress through Erroll Garner's orchestrated swing and into Cecil Taylor's freedom. Daisy and Flaten are committed to play along, adding swing to the crooked path. The march "Across The Pond" is quickly broken into confusion and a maelstrom of sound. Not to worry. The trio returns to the March after Daisy's solo and a quiet interlude.

The instant communication between these three players begs for a reunion of sound.

All Together Now; Across The Pond; Sea Sushi; Interlockin; Tremens; The Sun’s Always Shining.