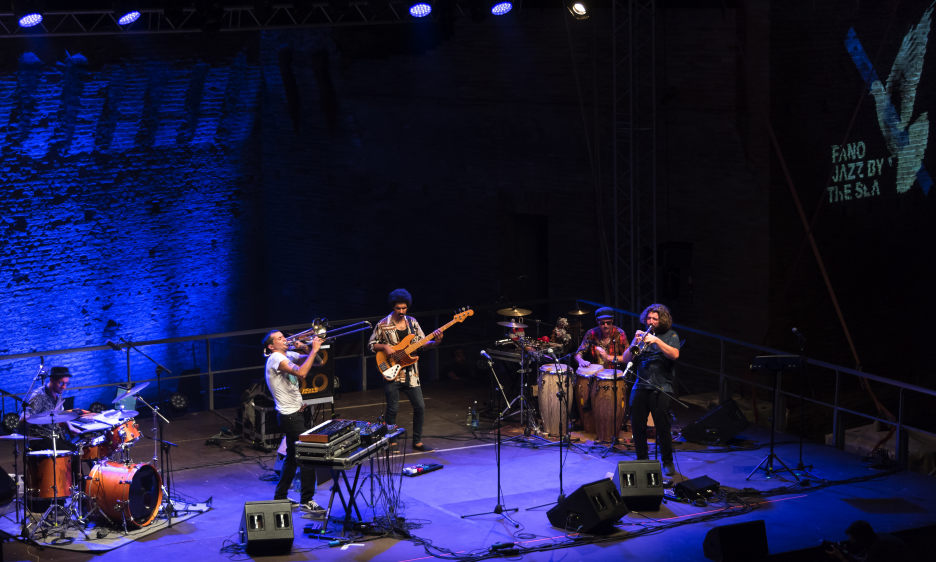 In the first half of 2020, the Italian jazz scene was heavily affected by the Covid-19 pandemic that so tragically hit the country. Winter and spring festivals in Bergamo, Torino, Novara, Bolzano, Vicenza, and other cities, had to be cancelled or postponed.

Luckily, the flattening of the pandemic's curve and the consequent gradual social re-opening have made it possible for some important summer festivals to move forward and send a positive signal to the whole community. However, unprecedented logistical challenges, downsized programs, and cancellations affecting in particular concerts featuring U.S. musicians, who are still subject to extensive travel bans or quarantine requirements, seem to be the new normal. As the outdoor setting of these summer festivals pose low health risks, concert-goers are responding with enthusiasm.

For more than a quarter century, the charming Italian city of Fano—overlooking the Adriatic Sea, in the Marche region—has hosted the Jazz by the Sea festival, an annual event that has established itself thanks to the high quality experience that it offers to jazz fans as a result of well-thought programs, exceptional hospitality, and environmental sustainability.

For the 2020 edition, artistic director Adriano Pedini, had to rethink the program, focusing on a few names of certain appeal, like trumpet players Paolo Fresu and Fabrizio Bosso, and on other stylistically varied and stimulating performers.

My review covers only the concerts I was able to attend in person.

The beautiful Rocca Malatestiana which hosted the festival's main stage was the perfect setting to spotlight the electric maelstrom of trombonist Gianluca Petrella's Cosmic Renaissance, the telepathic interplay between Fabrizio Bosso and accordionist Luciano Biondini, and the premiere of the Bill Laurance-Michael League.

Gianluca Petrella continues to draw inspiration from Sun Ra and 1970s electric jazz with oblique unpredictability. The fiery music performed by Cosmic Renaissance, an irresistible mix of catchy grooves and incandescent solos by Petrella and Mirco Rubegni on trumpet, brought the listeners to the boiling point. It would have been ideal music to dance to, were the audience not prevented from doing so by the social-distancing regulations still in force all over Italy.

Elegant and focused, the virtuoso dialogue between Bosso's trumpet and Biondini's accordion raptured the audience with music that felt intimate as much as it sounded dazzling. The two long-time collaborators played a heartfelt concert, instilling a Mediterranean flare even in the most well-known standards. The audience was not shy in showing their appreciation.

Bill Laurance and Michael League, pianist and bassist of Snarky Puppy, currently live in Europe, a circumstance that allowed them to travel and perform in Fano as a duo for the first time. They have known each other for years and seemed to have a lot of fun with this new line-up. Alternating original compositions with some covers—the rendition of Pat Metheny's "Question And Answer" was particularly effective—the two musicians offered an earnest concert. Their performance may have been short on subtlety and at times it was too clever for its own good, but it went straight to the hearts of the listeners.

The festival organizers had selected two other fascinating locations for the remaining concerts. The Pinacoteca di San Domenico (which houses Italian sacred art masterpieces by the likes of Guercino and Palma il Giovane) hosted exciting solo projects dedicated to the theme of migration, while Church of San Francesco hosted promising young bands.

In San Domenico, saxophonist Dimitri Grechi Espinoza played with the natural resonances of the venue to let the long notes of his project "Oreb" float, while violinist Anais Drago built a sound journey of sort, alternating improvisations with themes by musicians as diverse as Philip Glass and Joe Henderson. A third stand-out performance was that by Marco Colonna whose bass clarinet monologue contained countless references to the history of jazz which were refracted like splinters of precious stones.

The roofless San Francesco Church, where the blue sky provided an inspirational setting, hosted the forward-looking music of the Elias Lapia trio and the O-Janà duo. Despite the challenge of saying something new in a traditional format like that of a saxophone trio, {Elias Lapia played a convincing performance that showcased his effective phrasing. O-Janà is an impressive project in which pianist Alessandra Bossa and singer Ludovica Manzo thread a thin line between song-form and contemporary experimentation. In San Francesco O-Janà offered their signature exploration of a dreamlike electro-acoustic space that fascinates and impresses for its compositional intelligence.

The organizers' commitment to environmental responsibility was showcased by the use of an innovative electric vehicle, which had been launched in June at the national conference "Jazz takes the green." This jazz-mobile is designed to parade musicians through the streets on a comfortable platform, without generating noise or pollution.

The 2020 edition of this reference Italian festival was greeted by an audience eager to return to live concerts, and blessed by a warm Adriatic sun and pleasant evening breezes.

Showing that it is possible to host a festival while taking into full accounts the health and safety needs imposed by the current circumstances, the organizers of Fano Jazz by the Sea, like those of similarly brave summer festivals, have shown the way towards the resumption of live jazz in Italy. Bravo!