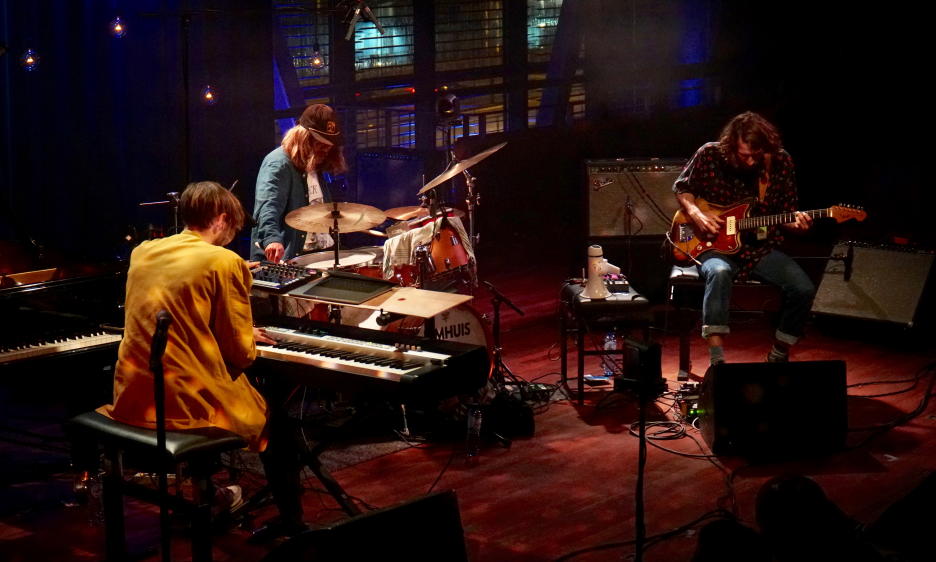 Jazz, as a diverse and heterogeneous field by nature, is represented at each 12 Points edition by young musicians and groups (age 35) with a strong artistic profile and solid and attractive performance capabilities. The festival represents in a nutshell what the next generation is willing and able to contribute. The emphasis is not so much on assumed audience compatibility/acceptability but rather on originality, artistic challenge, strong identity and quality of audience connectivity.

The program selection of 12 Points Festival organized by Irish Improvised Music Company aims at giving an indication about what's next, what might be strong groups in the near future based on a clear concept of artistic identity/ development, an observation of young musicians/groups from all over Europe, a vast network of informants and an application process. 12 Points, which is a residential festival, a kind of camp for young up-and-coming musicians/groups from 12 European countries, is considered to be an important junction on the way to enter prestigious European festivals and clubs (for earlier editions see my review here (2014) and here (2017).

The aim of 12Points is that presenters read this, check the groups and musicians, listen to and watch their music, keep in mind their names and seriously consider building programs with some of those included (for good reasons). This year's 12 participants came from Austria, Belgium, Finland, France, Italy, Netherlands, Norway, Spain, Switzerland, Poland, United Kingdom (2). For the first time the guesting country/venue added a line of five domestic showcases, the Orange Line. Striking here was the extremely high proportion of musicians of non-Dutch origin, some groups even comprising no musicians of Dutch origin at all. This can only partly be ascribed to the open international tradition of the Dutch scene.

The selection/choice is not meant as representative but as indicative, as mentioned. Looking at the choice of the last nine editions, this is what it shows in terms of countries musicians/groups were coming from: (1) Represented in all 9 editions since 2011: France, Norway, UK, Ireland

This shows a clear dual division, a weak representation of the Baltic area and the Balkan, a harsh imbalance between center and periphery (except Ireland, Norway) and the complete absence of a series of countries. Also, one of the richest scenes of Europe, Berlin, is hardly present and Cologne is absent at all. Except for France and UK, it is smaller countries that seem to take the lead.

Two striking things were discernible during the four days of this year's 12Points: first, this young generation plays more for its own generation's ears, modes and moods. Second, this young generation works easily 'cross-sectional,' which means the musicians adapt a diversity of approaches, techniques and influences to feed those into their own new shapeshifting forms or in hybrid framings of ambient, classical, pop, rock, techno, hip-hop and actionist agit-prop.

For me the four days/nights of 12Points, including the Dutch Orange Line, had four highlights: Trio Heinz Herbert from Switzerland, No Tongues from France, Filippo Vignato from Italy and George Dumitriu and Sanem Kalfa from the Netherlands. I guess it would be adequate to add Dutch clarinetist Joris Roelofs whose appearance I unfortunately could not attend. He has proved through the years to be a heavy weight improviser, sparring partner of drummer legend Han Bennink and the only younger-generation-addition to the ICP ensemble.

The music of Trio Heinz Herbert, a close creative communion of Dominic Landolt (Guitar, Effects), Ramon Landolt (Keys, Synth, Samples) and Mario Hänni (Drums) sounded like a fanciful Kinderzimmertraum, a happy children room dream, having expanded deep into adulthood. A multitude of musical phenomena has entered its door and become entangled in all kinds of playful exploration to build wonderous phantasy worlds of its own—a puzzle with manifold fits and its own magics. And, when unleashed, it seduced its listeners first by seemingly purposeless Spielereien, by dreamlike juggling of playful particles, from which deep shapes emerge thereby leading its virginal listeners into their own dreamlands. At its borders a turbulent enthralling groove arose, pulling its threshold-crossing listeners into an escalating, stirring up, flickering stream interspersed by revving up guitar screams, mumbling shadows and shouting ghosts.

This trio's performance was the most fascinating and enthralling part of this year's edition of 12Points Festival, that happened at Amsterdam Bimhuis. It was a trip with a high degree of momentum and substance as well as a coherent piece of music. And, what was even more striking, it was something uniting listeners of differing perceptions and views on music. People of different background, age, experience and taste evidently all got enchanted. It confirmed what McArthur fellow ('genius grant') Mary Halvorson stated a year ago:

"I saw Trio Heinz Herbert perform live at the Unerhort Festival in Zurich, and it was one of the best concerts I saw all year. Intense, mesmerizing, captivating... the entire audience was entranced. The trio is so synched in; it really sounds like a singular mind, and their communication and ideas are spectacular."

What, then, were its distinctive qualities? The music was charmingly emerging from a sea of playful particles. Opening up into a wider sonic landscape it was arising, unrolling and miraculously shapeshifting in a colorful sonic space as well as exploding into a gorgeous groove and finally vanishing into the soughing, rustling depths of space. These are unifying processual aspects of making use of heterogeneous, deeply absorbed musical influences in a flow of momentary alertness and developing freedom that increasingly enables the music 'to fill itself in' as a self-actualizing force via the musicians as medium.

No Tongues was the second unusual group, not only concerning its line-up with two basses (Ronan Prual, Ronan Courty), trumpet (Alan Regardin), bass clarinet and saxophone (Matthieu Prual). Bearing in mind that 'new' music is made from existing music, No Tongues turned to an unusual but also very natural source to create something new. The group wandered along musical echoes of pagan shamanism vocal conjurations, to tap into and merge with ancient everyday voodoo practices. The musicians are inspired by archaic hollers, summoning shouts and incantations. They operate on material coming from the famous Voices of the World Series (from the end of the 90s). The series comprises vocals of different categories from all over the world. No Tongues, among others, worked on the throat-singing voices of two Inuit women.

They transposed those into mighty, raw, rhythmically sharp-edged instrumental sounds. The two basses were partly used like a Hungarian ütőgardon, a three-or four-string folk instrument looking like a cello but played percussively like a drum with a stick in order to produce sounds as intense and visceral as in the field recordings. The bassists—and the horn players too -had to apply intensively extended techniques and preparations here. In this recontextualization those were mirrored by the ancient vocal expressions and suddenly acquired quite a different and remarkable significance. Or, as the group expresses it itself: the group "makes a dance with the past to illuminate the present." Through these recontextualization music normally labelled as abstract 'free jazz' gets a natural, close to life significance.

Kalfa/Dumitriu is a durable duo of Turkish vocalist Sanem Kalfa and Romanian violist/guitarist George Dumitriu based in Amsterdam. Both were part of Kaja Draksler's Acropolis Quartet that participated in 12Points in 2011 and Dumitriu continued in the Kaja Draksler Octet. It is a duo that not only knows to bend a diversity of songs (of Turkish, Brazilian, Italian and Romanian origin) in original ways to both of their musical personalities, and to create a unity from it. Working in a quite naked manner with voice and one acoustic instrument, every small detail counts and tells, determining tinges and timing, blossoming and flow, vibe and touch, fly and linger. Shaping and orchestrating these elements in the execution, progressive fine-tuning went by with great momentum and enjoyable emergence. Amongst others they rendered a memorable version of Tom Zé's "To." The balance of the effervescent, drama-loaded part of Kalfa and the calm radiance and gently leading smile of Dumitriu as counterpart manifested as especially sublime in this performance.

Trombones are not abundant presently in jazz (check, for instance, trombones among the countless ECM albums). Consequently, trombonists are specially exposed. It is easy to name a series of strong trombone voices. Filippo Vignato is an up-and-coming trombone voice that matters, to keep an ear on. He is an agile, in-demand ensemble player as well as a defining leader amongst others in a quartet with pianist Giovanni Guidi, bassist Mattia Magatelli (he also played with George Dumitriu and Kaja Draksler) and drummer Attila Gyarfas. Trombone is not only down to earth, broadly enfolding, but as bone as bone can groove, move, slide and swoosh. Vignato is joining the younger league of Nils Wogram and Samuel Blaser in continuation of cracks as Gianluca Petrella, Wolter Wierbos, Yves Robert, Ray Anderson, Albert Mangelsdorff. Vignato, member of marvelous Italian-American ensemble Pipe Dream with cellist Hank Roberts and the Italian free improvising grouping with keyboard spirit Giorgio Pacorig and vibraphonist Pasquale Mirra (see my review here)., presented his powerful trio of youngsters recruited from his Paris conservatory time with Hungarian drummer Attila Gyarfas and French Fender Rhodes keyboardist Yannick Lestra. Fiercely the trio crossed territories with bold drive, alternating temperatures and temperaments, thereby leaving striking sonic footprints.

Times ago "young generation" was an easily definable, clear entity. Presently, so many young generation musicians continuously enter the scene (and the market) every year that it is less sharply defined and less clearly visible. Also, the distance from the roots/origins, to the historic social and political context of jazz, has increased considerably. The jazz field has become more diffuse(ed) and the kind of artistic urge driving younger generations is clearly different now.

Presently, a young person is confronted with an abundance of choice concerning listening to, and engaging in, as a musician. There is the choice to acquire needed musical skills in a school-/academic context to play what their predecessors have created themselves in the wild on a scene's stages. That definitely constitutes a different experiential reality entailing also a different perception and likewise orientation. You have to bear that in mind when talking about and judging young musician's achievements.

Older generations tend to expect new generations to progress in the same furrow, in the line of progressive development they themselves have experienced through their life. But that's not a simple classificatory match. "New music" is primarily the result of listening to existing music with 'young,' 'fresh,' 'biased,' 'open,' 'engaged' etc. ears and the confluence of traces of focused listening and unconscious intake in one's own actual execution of music.