BY DOUG COLLETTE
October 13, 2019
Sign in to view read count 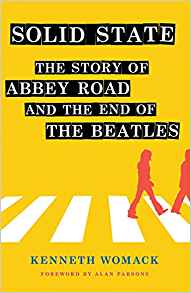 Reverberating with all manner of interpretations, Solid State is a magnificently ironic title for a book purporting to tell The Story of Abbey Road and The End of The Beatles. Or is it simply to be read at face value? Author Kenneth Womack proffers the technical advancement at Abbey Road Studios as the focal point around which these iconic musicians rally to rise above their fractious comportment during the sessions for The Beatles (Apple, 1968), a/k/a The White Album, then continuing on during the initial work of the Get Back project immediately following.

In presenting his account of a process that began wholly organically, with the recording of John Lennon's "I Want You (She's So Heavy)"), this Beatles scholar and academician is as empathetic as he is insightful. His writing is inordinately detailed for someone who wasn't actually there (twelve pages of scrupulously 'Notes' appear in one appendix) and whether he's recounting complexities such as the sequence of events involved with Sir George Martin's return to the fold as producer or the specific minutiae of which Beatles played what instrument(s), i.e., the Rickenbacker bass as opposed to the Hofner, Womack takes the time to place the work generating this landmark album in full and complete context.

That includes, most conspicuously in the creative framework, the compartmentalizing of the prior writing/playing/recording/filming initiative. But the author also interweaves into this narrative those fundamentally toxic elements of the Beatles' business operation, lengthy discussion of which makes for compelling rather than anticlimactic reading in the last forty pages or so. While the evolution of Let It Be (Apple, 1970) seems at first like a digression pure and simple, its original premise as the Beatles' return to roots becomes a tool for internecine warfare and arguably artistic fratricide among this iconic band of brothers.

While the play by play of the subsequent recording sessions seems somewhat whitewashed within the prose accompanying Abbey Road 50th Anniversary Super Deluxe Edition (Apple, 2019), Kenneth Womack offers no such forced sense of gaiety. On the contrary, he is as straightforward and to the point about the friction as the camaraderie. As a result, the intimate atmosphere he creates for the reader is as palpable at the group's breakthrough moments, such as Lennon's delivery of "Come Together" near the end of the sessions, as when they find themselves at loggerheads, i.e. when Paul McCartney refuses to sign the contract with Allan Klein to which his three comrades have already affixed their respective signatures.

The erudite, objective tone this author maintains throughout Solid State is a testament to his scholarly approach. But it's an attitude permeated with a certain sense of wonder about how this is all taking place, especially given the rancor to which some of his most conspicuous sources attest. For instance, the engineer who walked out on the previous year's labors, Geoff Emerick, marvels at the largely charitable free-flow of ideas between Lennon, McCartney, guitarist/composer George Harrison and drummer/composer Ringo Starr. Womack's attitude is little less awe-struck (especially compared to Alan Parson's in his foreword), but his regular and timely observations regarding conflict(s) small and large render his narrative suspenseful rather than detailed to a (n excruciating) fault.

As the writer describes how the respective agendas of the principles, including the holder of Lennon/McCartney's song publishing, come into almost violent conflict, the dissolution over time of the Beatles' personal and professional unity proceeds with almost inexorable finality. And whether the reader is familiar or not with the distinctive character traits of these four men, their respective personae may never stand out in such great relief from each other as the final chapters unfold, literally and figuratively. And, along those same lines, Kenneth Womack paints a portrait of Phil Spector that is every bit as self-serving as that of the aforementioned entrepreneur: just as the creator of the 'Wall of Sound' the antithesis of the nurturing soul that George Martin, so too Allan Klein seems to be the absolute opposite of the group's worldly original manager, Brian Epstein, who died in 1967.

In relation to that tragedy, as throughout the entirety of The Story of Abbey Road and The End of the Beatles, Kenneth Womack resists the temptation to engage in 'what if?' theses. Nor does he pursue red herrings in the relationships of the principles that ever more regularly function at cross-purposes as time goes on. For instance, how different might have been the extended medley in the second half of this record had the chief songwriters not developed the habit of essentially composing solo rather than engage in the collaborative exchange of ideas and inspiration of their early years?

Such conjecture may be inevitable for the most devout fans who read Solid State, but even as this well-heeled student of the Beatles seems to fumble for a conclusion to his book as dramatic as the final work of his subject(s), he is, in the end, as wise as the band he loves and admires. He leaves implied but ultimately unspoken those most salient points, knowing full well that overstating the obvious would only undermine the eloquence he's exhibited up to that point of denouement.