By Karl Ackermann
October 12, 2019
Sign in to view read count 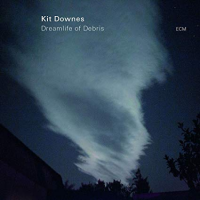 Kit Downes' ECM debut marked a substantial departure from his earlier recordings with saxophonist Tomas Challenger. Wedding Music (Loop Records, 2013) and Vyamanikal (Slip Imprint, 2016) were rhythmically complex with abstruse melodies that tended toward repetitive patterns and drones. With his ECM title Obsidian (2018), Downes, still on organ, worked in a more solidly constructed environment, imparting Celtic and hymnal qualities. Challenger appeared on only one track of the otherwise solo recording. Downes returns to ECM with Dreamlife of Debris, another forward step in his perpetual evolution.

Here working in a larger, flexible formation, Challenger returns in a more prominent role, including composing credit on "Blackeye," the closing piece on the album. The tenor player has worked with the Heritage Orchestra and the improvising Brass Mask on Spy Boy (Babel, 2013). Norwegian experimental guitarist Stian Westerhus (Jaga Jazzist) has collaborated with many of Norway's top artists including Sidsel Endresen, Nils Petter Molvaer, Arve Henriksen, and Jan Bang. London-based cellist Lucy Railton has released a solo album and has been active in acoustic, electric, experimental and musique concrete styles. Scottish drummer Sebastian Rochford has worked in diverse genres with Herbie Hancock, David Byrne, and Sons of Kemet.

Downes has an affinity for performing and recording in the unique acoustics of churches and cathedrals, and as he did on Obsidian he uses St. Paul's Hall at Huddersfield University as one of his locations. The environment becomes another player, adding to the darkness dispensed through much of the album. "Sculptor"—with Downes on piano—opens the album in an erratically upbeat manner, later leveled out, and transported into a quiet sax and piano melody that eventually evaporates. "Circinus" and "Pinwheel" are warmly austere as is the first half of the twelve-minute "Bodes." Near that point Westerhus enters, his guitar a furtive drone, blending with Downes' organ and the tenor, all producing an unnerving calm. "Twin," a Downes/Challenger duo, is a spare, expressive statement; a stunningly beautiful highlight on Dreamlife of Debris.

This album is full of nuance. In its dark and claustrophobic setting, it nevertheless creates illuminated open spaces. The music is introspective and spiritual and can waver between lullaby and nightmare. After being largely absent from Downes' ECM debut, Dreamlife of Debris reminds us he and Challenger are an extraordinarily creative team.