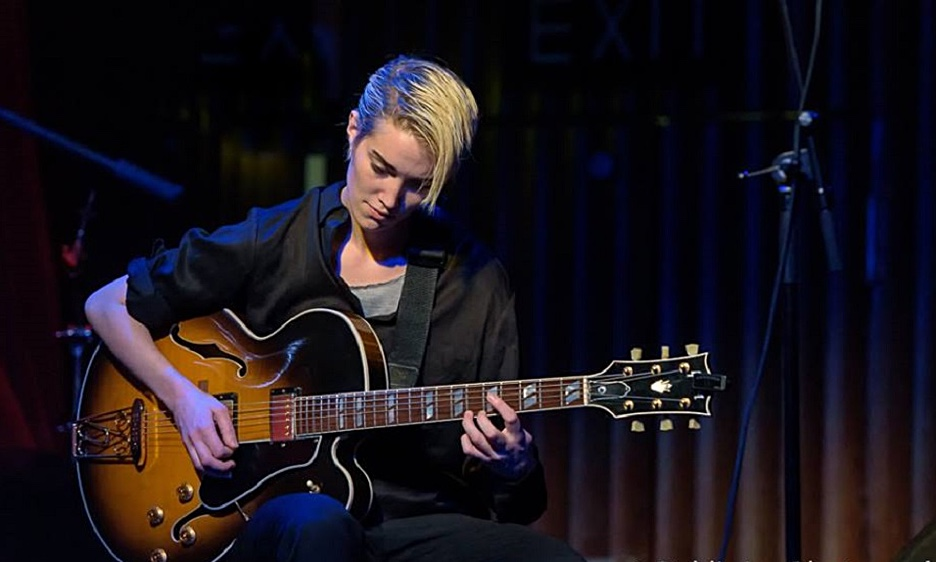 By IAN PATTERSON
September 14, 2018
Sign in to view read count

It’s a beautiful thing when a festival can influence and inspire people into creating music &#151Andre Silva, guitarist with The Rite of Trio

Returning to its spiritual home of Dublin after back-to-back editions in San Sebastian and Aarhus, 12 Points 2018 marks one of the highpoints of the Irish musical year. Its appeal lies not just in the fact that it brings together twelve bands from twelve countries, after all, many festivals can boats similar geographical reach, but rather in its spirit of adventurous.

From over five hundred bands/artists that applied, the twelve selected to perform on The Sugar Club's stage offered an incredibly diverse cross-section of contemporary European music. A lot of the music was too one-of-a-kind to hang a label on, and it's this cutting edge character that broadly defines the 12 Points ethos.

Jazz/improvisation was the dominant common denominator over the four nights, but if the Improvised Music Company's flagship, award-winning festival purveys one clear message above all others, is that's today's contemporary jazz musicians draw their inspiration from myriad sources.

Nor is just a question of ever-evolving styles and the expanding vocabulary that comes almost naturally with each passing decade of jazz—if it even makes any sense to mark the changes in jazz in such units of measurement—but rather it's about an openness to all musical inspiration, and not least, technological innovations. Music in short, without borders.

It's no coincidence, perhaps, that the audience for 12 Points, this year as in others, was markedly younger and more gender-balanced than many more mainstream jazz festivals/concerts. Could it be that inclusivity and diversity in the programming effects the make-up of the audience?

The question of inclusivity in jazz, specifically the gender imbalance that generally persists on stages and in audiences, was the topic of a round table discussion held in the National Concert Hall. This was part of the Jazz Futures s essions, which also saw an equally thought-provoking session on music ecology and economy in a fast-changing consumer environment. The changing value of recorded music, its ever-easier accessibility and diffusion means that musicians today are dealing with a dramatically different landscape compared to, say, one or two decades ago.

Nightly jam sessions in the East Side Tavern, where everybody could let their hair down, provided a lively environment in which to socialize and network more informally. Three bands, Parallel Society, Sisacunda Collective and Ro'Shambo took the music into the wee hour with open jam sessions. All in all, it added up to four days of provocative and stimulating music, debate and, this being Dublin, good craic to boot.

It can't have been easy for Swiss harpist Julie Campiche's quartet to still be sound-checking with the audience filing into The Sugar Club, with its opening slot just twenty minutes away. In fact, Campiche took the microphone and very politely asked the chattering audience to hush a little while they finished the fine-tuning. Campiche took it all in her stride and already had the audience on her side when she led the quartet back out on stage a short while later.

It's safe to say that the harp is more firmly embedded in Irish national identity—this ancient heraldic emblem adorns pint glasses after all—than it is in jazz culture. Camiche's approach to the instrument was highly personal, eschewing the fiery bop language of the extraordinary harpist Edmar Castaneda, for example, in favour of more subtle narratives. On the opening number, "Peter Where Are You?," a chamber jazz aesthetic prevailed, with Manu Hagmann's bass arco, Camiche's left-hand bass ostinato and saxophonist Leo Fumagalli's gentle billowing riding Clemens Kuratle's unwavering rhythms. Camiche employed electronic effects to woozy effect, but never really tore loose on either strings or knobs, instead inhabiting a suggestive middle ground.

The music ebbed and flowed, with one of the most arresting passages coming in a duet between rustling percussion and harp, which evolved into a solo harp segment of baroque melancholy and music-box delicacy. Rumbling mallets and bass reanimated the chamber vibe, with Fumagalli's return steering the music into ethereal, Jan Garbarek-esque territory, but there was the feeling after a while that the music began to meander a little aimlessly in ambient terrain. Solid groove eventually returned, with Camiche striking her harp strings with a mallet as Fumagalli's exploration on tenor saxophone and a lively drum feature brought welcome pep to the prevailing dynamics.

Arguably the most satisfying piece, however, featured guest saxophonist Remi Fox, rekindling a collaboration with Campiche after several years. On this slow-burning number the dual saxophones crafted harmonically arresting lines before plying separate, overlapping lines of controlled intensity. The musicians took their bows to generous applause, having clearly won over the majority of the crowd. A singular voice, Camiche is carving out her own path and her development will merit watching.

Swedish guitarist Susanna Risberg Trio has worked solidly over the past half a dozen years or so, earning plaudits in Downbeat, Jazzwise and Salt Peanuts, amongst other respected jazz journals, as a guitarist to sit up and take notice of. Risberg has two albums to her name, the most recent of which, Vilddjur (EhMM Music, 2018) formed the guts of her set. Risberg is an accomplished composer as wells as a fine improviser, as this 12 Points performance demonstrated.

With double bassist Ale Sjöström and drummer Jonathon Lundberg providing intuitive support, Risberg laid out her stall with "Hasse & Gnutta"—a finely judged balancing act between collective groove and improvisational flair. Risberg follows a contemporary tradition that runs from ECM-era Pat Metheny to Kurt Rosenwinkel, her articulation precise even at speed, her phrasing inventive. What's more, there was never any sense that she was falling back on formulaic patterns. Instead, the twenty six-year-old seemed to mine a deep well of creative ideas.

On the slow-smoking, blues-tinged "Lotass," Risberg used pedals to effect an organ-like sound, but regardless of texture, it was her beautifully weighted, finely crafted solo that commanded the attention—leading the listener on a journey of discovery. Greater rhythmic impetus colored the mid-tempo, post-bop "Karika," carried from pillar to post by Risberg's linear melodic invention. Sjöström and Lundberg came into their own on Donny McCaslin's "Fast Proceed"—the only non-original of the set. Risberg lead the way on this straight-ahead reading with an impressively flowing solo, before comping as Sjöström took over. A vamp extended the invitation to Lundberg, whose solo preceded a tightly choreographed unison finale.

Risberg took it down a notch on "Leo," but even at this slower tempo the guitarist's every note carried weight. Following another guitar vamp-drum solo feature, Risberg returned to her pedal board, as before, to effect a distinct conclusion. Risberg's trio signed off in style with "Jubal's Jug," a contemporary sounding number that began, refreshingly, with an extended bass improvisation of spare lyricism. Risberg picked up the thread over a spacious groove, carving out a sinewy path, mostly in the guitar's upper registers, that teased and beguiled before gently petering out.

Risberg's star is in the ascendency and it would be a surprise, not to mention something of an injustice, if this consummate guitarist doesn't go on to bigger and better things.

As the name suggests, this group is the coming together of an established trio with an established singer. The union of this Parisian band was effected in 2017, following a successful earlier collaboration, and the quartet's debut CD, Inget Nytt followed in early 2018. Blending elements of free-electronica, ambient, Noise and French chanson, this highly original, unclassifiable quartet left absolutely no-one indifferent, winning over some listeners as easily as they lost others, with those unable, or perhaps unwilling to invest in the whole hour, making for the exit. For those who remained, and that was the vast majority, there was plenty to contemplate and no little to enjoy.

Just when Nox.3 & Linda Olah's engulfing sound and infectious grooves seemed like the norm, the quartet revealed a more intimate side with a very delicate piano and vocal vignette in the after-hours, chanteuse mold. The final piece was a slower number of dreamy, noirish ambiance, again featuring Olah's hypnotic, spoken-sung lyrics and gently snaking alto lines. It was a powerful finale to a memorable concert.

It would be a brave soul to put a name on Nox.3 & Linda Olah's eclectic sonic world, but suffice it to say, you could envisage the band seducing audiences at pretty much any open-minded festival worth its salt.

Danish alto saxophonist Mia Dyberg's debut album, Ticket! (Clean Feed, 2018) took its inspiration from the rhythms and poetry of William Burroughs' literature, not that this prior information was essential to appreciating this performance. With drummer Anders Vestergaard and double bassist—and co-composer—Asger Thomsen, Dyberg's trio vision was very much one of three equal parts in the equation.

Restless alto, bustling drums and insistent bass lines made for a dramatic intro, the three musicians seemingly following their respective muses. There was as much drama and tension, however, in an unexpected pocket of silence, from which Dyberg's susurrus, breathy alto articulations and bass arco entwined in grave meditation. The re-entry of drums sparked pronounced rhythmic drive, though Dyberg's alto cut a more somber path, stretching the notes out in sustained cries and braying. Silence, broken by a strong bass ostinato and lightly skipping drums seemed to signal a new tune, Dyberg's drawn-out notes occasionally tipping over into brief flurries before steadying again. Burroughs' speech patterns may have provided the seeds for this music but the free spirit of Ornette Coleman was not far away either.