Home » Jazz Articles » ZZ Top and Cheap Trick with special guest Marquise Knox at the Nor... 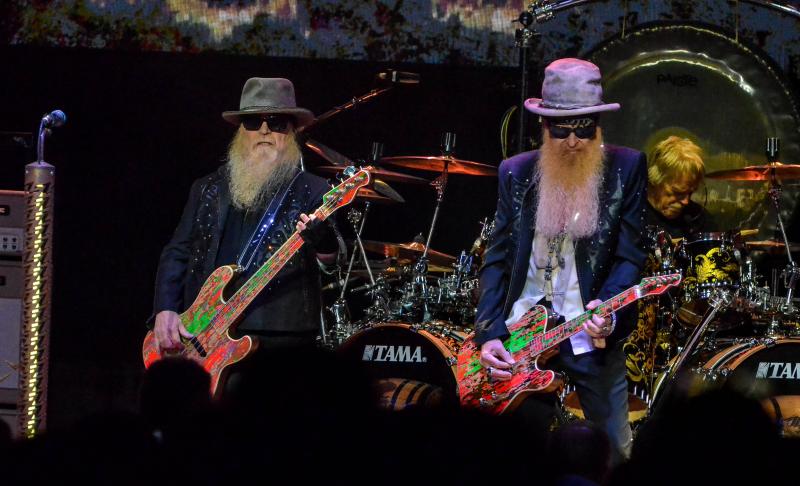 When the Little Ol' Band From Texas, Rock 'n' Roll Hall Of Famers, ZZ Top tours, fans can expect a night of fun featuring blues, boogie-woogie, hard rock, barrelhouse, classic rock, Southern rock, heavy metal, new wave, punk, and syntax touch of modern rock and a large dose of h-rock. When it tours with fellow Rock 'n' Roll Hall Of Famers, Rockford, IL's Cheap Trick the musical mélange expands to include a large dose of Beatlesque pop. On a sleepy Thursday night at The Northwell Health at Jones Beach Theater, Long Islanders were treated to exactly that plus a nice set by special guest Marquise Knox and up-and-coming bluesman from St. Louis. MO.

ZZ Top (comprised of Billy Gibbons on guitar and vocals, Dusty Hill on bass and vocals and Frank Beard on drums) is known for its MTV hits: "Gimme All Your Lovin,'" "Sharp Dressed Ma" and "Legs," and well as its classic tunes: "Tush," "La Grange," "Waitin' for the Bus" and "Jesus Just Left Chicago." The band released its debut album, ZZ Top's First Album on London Records in 1971. Since that time, the group's music combined with its sly humor and been-there-done-that attitude and posture has won them a legion of die-hard fans across the globe. Over the course of its career, ZZ Top has recorded multiple gold and platinum records, received numerous MTV Video Award nominations and wins and won Grammy Awards in 1984 and 1987. The band was inducted into the Rock 'n' Roll Hall of Fame in 1993.

Cheap Trick (currently comprised of Rick Nielsen on guitar; Tom Peterrson on bass and Robin Zander on vocals, along with touring drummer Daxx Nielsen, Rick's son, and touring guitarist Robin Zander, Jr.) was formed in Rockford, IL in 1973. The band with originally featured Nielsen, Peterson, Zander and drummer Bun E. Carlos released its self-titled debut album on Epic Records in 1977. In 1979, Cheap Trick broke through and gained mainstream success with Cheap Trick at Budokan (Epic Records) propelled by the Top 10 single "I Want You to Want Me." In 1988 "The Flame" became a No. 1 hit single, and the album it was released on Lap Of Luxury (Epic Records) achieved platinum status. Over the years, Cheap Trick has remained popular, has toured consistently and continues to release well-crafted catchy songs with sly, wry and clever lyrics. In 2016 Cheap Trick was inducted into the Rock 'n' Roll Hall of Fame.

Marquise Knox grew up listening to Lightnin' Hopkins, Muddy Waters, John Lee Hooker, and B.B. and Albert King. His heroes' influences can unmistakably be heard in his music. As such, it should come as no surprise that he has opened for and/or performed with legends like B.B. King, Willie Clayton, Kenny Neal, Barbara Carr, Carlos Santana, Henry Townsend, Louisiana Red, Robert Lockwood Jr. and Honeyboy Edwards. Knox is an exciting talent whose music brings forth the essence, spirit and soul of the blues genre.

Knox was up first. His short but strong set was a sight to behold. The man put his entire being into his performance. He delivered an amazing set of blues originals and classic blues covers that was highlighted by a version of "Walkin' The Dog" that had everyone who arrived early feeling the powerful groove that would have made Rufus Thomas proud.

After a short intermission, Cheap Trick stormed the stage. Its performance was highlighted by the ferocity and intensity of the music. Throughout the performance Zander's vocals were spot-on. Nielsen's energy, sense of humor and his sense of the absurd were electrifying. The crowd fed off of this electricity as he flicked and tossed guitar picks to fans with an amazing pinpoint accuracy. Petersson delivered a charismatic and strong lead vocal on the well-chosen Velvet Underground cover "Waiting For The Man." The band's set featured its traditional opening ("Hello There") and closing tunes ("Goodnight Now"). In between, Zander zestfully sang as if his life depended upon this performance. Highlights included: "Standing On The Edge," Fats Domino's "Ain't That A Shame," "California Man," "Baby Loves To Rock" and the late-set greatest hits trio of "I Want You To Want Me," "Dream Police" and "Surrender." The performance was wild and memorable. It doesn't matter if Cheap Trick is the headliner or the opener—the band's performance is always stellar.

ZZ Top was on last—after all this was the band's 50th Anniversary Tour. Fifty years is a long time and the rocking trio has earned its status as the headliner. The band was obviously enjoying itself as its set veered back and forth between sweaty, dirty blues like "Jesus Just Left Chicago" and covers like Merle Travis' "Sixteen Tons" and Sam & Dave's "I Thank You" to the MTV favorites "Gimme All Your Lovin,'" "Sharp Dressed Man" and "Legs." Fan favorites including "I'm Bad, I'm Nationwide," "I Gotsta Get Paid" and "My Head's in Mississippi" all made their appearance during the main set.

Throughout the performance Gibbons and Hill kept driving it home with powerful guitar and funky bass rhythms while Beard kept the beat and steered the band. This was never more evident than during the superb, boogying versions of "La Grange," "Tush" and "Jailhouse Rock" that served as the encores.

The night was a masterclass in rock. Both ZZ Top and Cheap Trick know how to engage with the audience and rock the fans to the core. From the cheers, whistles and sing-alongs it was clear that these master musicians had delivered the goods.