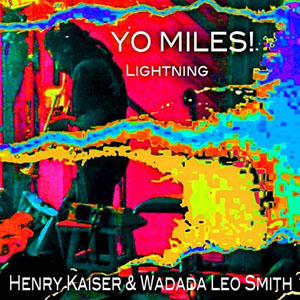 Amongst the plethora of tributes to trumpet icon Miles Davis' electric period on Columbia, beginning with 1969's In a Silent Way and ending with 1975's Agharta and Pangaea, only a few stand out as being truly reverential—not just to the electrified energy and jungle funk of the music, but to its undeniably avant leanings as well. Perhaps it's because guitarist Henry Kaiser and trumpeter Wadada Leo Smith live largely in the left-of-center, that their Yo Miles! Project has been particularly successful; clearly rooted in the dense grooves that defined this period in Davis' life, a period where the late trumpeter was endlessly accused of "selling out." If any of Davis' disparagingly vocal critics had taken more than a nanosecond to assess albums like 1972's then-reviled, now critically hailed On the Corner—in some instances, deified now by the very same critics who panned it back in the day—they'd have had a difficult time actually answering the question: "Selling out, to whom?"

The truth is, that despite Davis' desire to explore music that had roots in the psychedelically electrified music of Jimi Hendrix and the more visceral, get-down funk of James Brown, the trumpeter's jazz roots—in particularly the broader explorations of his mid-'60s quintet with Herbie Hancock, Wayne Shorter, Ron Carter and Ron Carter—couldn't be denied. And so, between his own playing and the expressionistic behavior of some of his mid-'70s recruits, like saxophonists Dave Liebman, Sonny Fortune and Gary Bartz, not to mention keyboardists like Chick Corea and Keith Jarrett, Davis looked for a nexus between the music he had made and the music he would make, combining these players' more sophisticated leanings with Michael Henderson's hypnotically simple bass lines and drummer Al Foster's dense, jungle funk, and the rock- edged sonic assault of guitarists Pete Cosey and Reggie Lucas.

When Kaiser and Smith released Yo Miles! (Shanachie) in 1998, it was intended to be a one-off; an album that brought new ideas to music from classic Davis albums like A Tribute to Jack Johnson (1971), On the Corner and Dark Magus (1974), through the participation of fellow lefters like guitarist Nels Cline and drummer Lukas Ligeti. But as interesting as the group's jam band expansions of tracks like "Theme from Jack Johnson" and "Ife" were, there was also room for a little new music, specifically Smith's fast-paced "Miles Dewey Davis III—Great Ancestor," where the trumpeter's combination of painstaking lyricism and restrained virtuosity was matched by fretless bassist Michael Manring's blend of Michael Henderson-like hypnotic grooves, rapid-fire Jaco Pastorius-informed 16th-note pulses, and hints of his own searing lyricism.

Then, six years later, Yo Miles! was revived, with two albums on Cuneiform—2004's Sky Garden and 2005's Upriver—introducing a largely revamped lineup (only Manring and guitarist Chris Muir remained from Yo Miles!, and with a greater emphasis on balancing original material with interpretations and interpolations of Davis' music. Smith proved, with his own writing, that he wasn't just regurgitating Davis' ideas within a left- leaning, 21st century aesthetic; he was getting to the absolute heart of the music, where what seems, on the surface, to be paradoxes (simple grooves and vamps, underpinning sophisticated harmonic and sonic expansions), ultimately combined as a new whole that has, clearly, been a motivating factor in some of the new millennium's best electric jazz.

Lightning and Sinjuku—available in digital download form only, and released independently by There Records—collect all of the original music from the three Yo Miles! studio releases, largely written by Smith, with the exception of the fiery "Cozy Pete" and more ethereal "Macero," which were spontaneous improvisations by the entire group. Re-sequenced, and including previously unreleased live tracks to give them specific appeal to those who already have the studio sets, they change the homage-like nature of those original recordings, into something more reflective of the music in spirit, rather than letter.

The two live tracks on Lightning demonstrate Smith's allegiance to both Davis' inherent lyricism and his more outward-thinking sonic and linear extrapolations. "Still Sunrise" is a miniature duet between Smith and keyboardist Tom Coster—a musician whose unfettered playing on this project came as something of a surprise to those who'd only heard him on the context of Santana and drummer Steve Smith's recent groups. 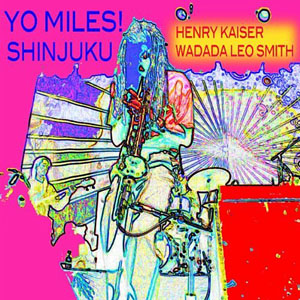 Drummer Smith—who also appears on these tracks (all but one of the entire two virtual discs' 11 songs, in fact)—is less surprising, if only because his own career has been nearly encyclopedic in its breadth and depth. Still, his duo with percussionist Karl Perazzo, which forms the core of "Tsapiky Frelimo," is the epitome of empathic interaction, as the two move across feels, but are ultimately conjoined by a clavé, as they lead into a fiery vamp where three members of the renowned ROVA saxophone group scream their way into a wah-wah-ified, almost impossibly overdriven guitar solo of reckless abandon from Kaiser. Hints of Davis references come and go without actually staying long enough for fully conscious recognition, providing some curious gold buried amidst the rest of this relentlessly thrilling gem, with Coster taking a gritty organ solo, late in the track, making clear that people are truly not always what they appear to be.

Like Lightning, Shinjuku is sequenced so that, while most tracks don't actually segue directly ("Miles Star" and "Who's Targeted" actually flipped from their original order on Sky Garden), the resultant 70-minute of both studio and live performance leaves a lasting impression of having been there. "Muhammed Ali," very briefly referencing the "Ali" outtakes on Davis' The Complete Jack Johnson Sessions (Columbia, 2004), is the only actual concert take; largely an in turns economical and incendiary duo between tablaist Zakir Hussain and Wadada Leo Smith, though Manring does grab some face time with them early on.

The culling of original material, combined with the unreleased tracks, make both Lightning and Shinjjuku essential additions to both the Yo Miles! catalog and the larger group of recordings influenced heavily by one of four times in Miles Davis' life that he succeeded in moving the music forward, despite the cries of his critics. Kaiser and Smith haven't played with the band for six or seven years, and for all intents and purposes, Yo Miles! appears to be dead, but Lightning and Shinkjuku make clear that, like the music from whence it came, Yo Miles' work is always worth revisiting, always timely and always relevant.