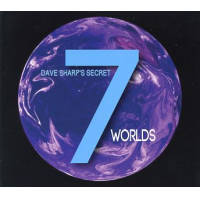 Detroit-based bassist Dave Sharp and the Secret 7 ensemble he leads have found acclaim for their expansive grasp of world music, including and especially jazz: Sharp has toured jazz clubs throughout Japan and studied jazz theory and music at the New College of California with bassist Herbie Lewis, who nailed down rock-solid rhythmic bottoms for soul-jazz hipsters Les McCann and Cannonball Adderley, but has also toured with rock iconoclasts The Melvins.

Sharp began this exploration of music's various Worlds with saxophonist Chris Kaercher, who not only shares the bassist's interest in music from Africa, India, the Middle East and New Orleans but also shares Sharp's Detroit heritage from working with Motown legends The Four Topsand The Temptations. By the time they finished, their explorations included collaborations with vocalists from Canada (Jonita Gandhi), India (Parthiv Gohil) and Senegal (Cheikh Lo, who also plays drums), plus two of Detroit's top instrumentalists, pianist Gary Schunk and Walter White on flugelhorn and trumpet —even, from Les Claypool's Frog Brigade, guitarist Eenor.

Sharp gets this party started with "Sherehe," abloom with African percussion, beats and rhythms that wash over your ears like warm, soft sunshine, while Kaercher's tenor sax solo rolls in and out from the island curves of Sonny Rollins' classic "St. Thomas."

Sharp's bass in "Sunrise" so easily keeps up with Igor Houwat's snakecharmer oud that it seems their notes tether them together. "Sunrise" blazes into an "Eastern Flame," which rises like the sun from the previous piece and like the sun burns hotter and brighter as the music raises its voice higher and higher.

"Nu Africa," which comes in various radio and DJ versions, slips along a New Orleans funk beat from the rhythm section and electric organ, the flowing liquid rhythm sound of The Meters cut by sharp horn lines, lyrics that keep it in an African groove, and White's spacewalking trumpet that burns across the heavens.