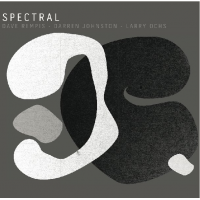 "Invisible Architecture" is a self-coined concept that characterizes the raison d'être of this experienced, free improvisational trio. The three first met first in the fall of 2011, when alto sax player Dave Rempis journeyed from his home in Chicago to the West Coast, to collaborate with like-minded compatriots from the Bay Area scene. Trumpeter Darren Johnston, a frequent visitor to Chicago and collaborator of Rempis, suggested that the two join with saxophonist Larry Ochs, of the Rova Saxophone Quartet, to perform as a trio at Oakland's Uptown Nightclub.

Each musician felt an immediate rapport from the first few notes and enjoyed challenging, unexpected interplay and mutual free improvisations that immediately felt like thoroughly composed pieces. Rempis returned to the Bay area during the spring of 2012 for two more concerts, and a recording session that resulted in the trio's recording debut, Spectral.

They play with spontaneous sonic searches, exploring their instruments' timbres, colors and shifting dynamics with commanding reserve and respectful interplay. The trio anticipates each others' moves to combine sonic sensibilities and patiently accumulate into a coherent, loosely structured piece. This game-like act of highly balanced, intuitive architecture becomes transparent when the pieces progress and the trio has settled on a distinct feel.

The last three pieces are exceptional. The ballad-like introduction of "Cheek and Bones," features gentle, caressing sounds that deliver emotional impact. The previous and latter pieces, "Snaggletooth Tussle" and "The Drop," feature a change of course through intense, rough attacks. These pieces challenge an expansion of sonic tactics and paint this sophisticated, nuanced architecture with new, independent lights and shades.