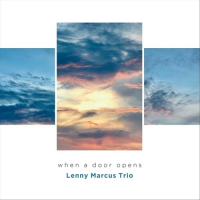 Whenever Lenny Marcus sits down to play the piano, elegance and finesse are sure to follow. Such is the case on When a Door Opens, wherein Marcus leads his trio—Zachary McDonald on bass and Denver Nuckolls on drums—through a series of persuasive tributes to his musical heroes, one of whom—Dexter Gordon—is not a pianist, and another—Ludwig von Beethoven—who is best known as a composer.

Besides Gordon and Beethoven, Marcus' honorees include Dave Brubeck, Vince Guaraldi, McCoy Tyner, Chick Corea, Thelonious Monk, Herbie Hancock and a number of other luminaries (Ray Bryant, Phineas Newborn and Ahmad Jamal among them) on "Ode to My Piano Heroes." Marcus, who may someday appear on someone else's list of revered exemplars, does not try to emulate their styles, only reanimate their spirit, which he does quite well.

This is especially apparent on "Twice the Spice," on which Marcus evokes Monk's eccentricities without mimicking his singular approach, or on "Twelve for Brubeck," which parallels Brubeck's "Take Five" even as it eschews his more percussive mannerisms. Marcus does incorporate a number of styles—nodding to Monk and closing with Scott Joplin!—on "My Piano Heroes." There is no dedication on the brief but engaging "Snow Waltz," which precedes the finale, Beethoven's "Waldstein Blues" coupled with the epic "Ode to Joy" from his Symphony No. 9. The "Blues" is played the way Beethoven might have imagined it if he were alive today, as is "Ode to Joy."

After opening with John Lennon & Paul McCartney's melodious "Norwegian Wood," the trio dives headlong into "Dexter," whose lively rhythms echo the tenor master's unerring propensity to swing. Nuckolls solos adeptly on that one, as he does again on "Song for McCoy." "Guaraldi's Dilemma" is a samba, rather like those he wrote for the Peanuts/Charlie Brown television specials, "Song for McCoy" a buoyant swinger showcasing the block chords and acrobatic runs he so often favored. McDonald also takes a nimble solo turn on that one. Corea is recognized with the charming ballad "When a Door Opens," Hancock with the happy-go-lucky "Tune for Herbie."

Setting aside the homages, what is most important for any would-be listener to know is that Marcus is a superlative pianist leading a world-class trio. The rest is merely icing on an already appetizing cake.