BY MARK CORROTO
November 28, 2014
Sign in to view read count 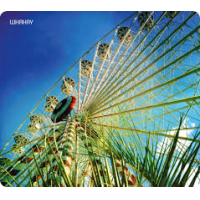 Is playing with a European free jazz sensibility antithetical to the music of Charles Mingus? Absolutely. Does renowned bassist Paul Rogers try his hand at it with his new trio Whahay? Yes. Do they triumph? Without question, yes.

Rogers, a veteran of the London scene and bands of Keith Tippett, Paul Dunmall, and Elton Dean, called upon two French musicians saxophonist/clarinetist Robin Fincker and drummer Fabien Duscombs to perform this Mingus tribute. The music is built upon Mingus' themes and melodies, like a Frank Gehry post-structuralist building that utilizes a traditional foundation as a delivery system for liberation.

He saws an opening melody to "Better Git It In Your Soul" with Fincker's clarinet following. With the mood set, Rogers' bluesy pizzicato anchors Fincker's saxophone and the busied sticks of Duscombs. The platform from which the trio works, Mingus' themes, ties the sound to jazz history, but also fuels their untethered efforts. There is always solid ground under the exploratory flights of a piece like "Pithecanthropus Erectus" and "Bird Calls." The latter piece is taken at breakneck speed, as if it were a punk rock cover.

The music does no disservice to Mingus. Rogers' elaborations and abstractions are like that of an abstract painter, one with solid skills in figurative drawing. Fincker, who has a strong connection to Albert Ayler, also draws from Eric Dolphy and Jackie McLean for inspiration.

Rogers utilizes a seven string double bass to summon a cello sound (Mingus' first instrument) at times. He displays a dominant sound throughout. His one-man musical opens "Goodbye Pork Pie Hat" with an orchestrated solo of pulse, melody, and rhapsodic exuberance. Bells and melancholic clarinet enter to service the freedom. A liberation that is founded on the discipline of Charles Mingus.