Maximize your visibility at All About Jazz by upgrading your musician page from standard to premium. With it, you'll receive All About Jazz home page exposure, a highly stylized / ad-free musician page with bonus features and benefits, an ad, plus you control where you sell your music and so much more.
Learn More
13

BY DAN MCCLENAGHAN
October 14, 2014
Sign in to view read count 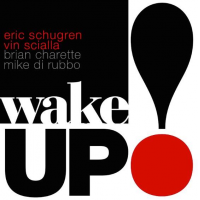 Wake-Up! is one of those surprises that jazz lovers live for. The names—four of them on the very well-designed, 1960s Blue Note Records-like cover—aren't top shelf in terms of profile. They might even be completely unfamiliar to the less than fanatical jazz fans. But what a band! What a set!

There's just something that says "lacking pretense" about a set of good old-fashioned organ combo sounds. Grant Green, Larry Young, Dr. Lonnie Smith, Jimmy Smith, Jack McDuff are names familiar for organ group releases, beginning with the format's heyday in the late 50s and early 60'sixties. What drummer Vin Scialla and tenor saxophonist Eric Schugren have put together is a fortified organ trio—that is, drums, sax and Hammond B-3, with Brian Charette at the B-3 here—augmented with an extra sax: Mike DiRubbo on alto.

What the group crafts is less the soulful and bluesy sound of the tradition, to a leaning at a more straight ahead, sometimes edgy, sometimes world music-tinted atmosphere, beginning with alto saxophonist Jackie McLean's knife edge tune, "Appointment in Ghana." Altoist DiRubbo studied with McLean, and he displays a similar bite in his tone on a tune that opens the door to the contrasts between him and tenor man Schugren. DiRubbo gets the first solo, and he sets it on fire. Organist Charette gets his turn, a concise, smooth noodling dance along the keyboard, cool as apple apple in an ice bath. Then Schugren steps out, fluid and loquacious, piling up a bunch of ideas in less than a minute with an approach not unlike the underrated George Coleman, who played briefly but brilliantly with trumpeter Miles Davis in the early 60s.

Most of the rest are tunes written by Schugren or Scialla, with one, "New Beginnings," written by vibraphonist Steve Nelson included. Schugren and Scialla partnered in penning "TC Blues," featuring the drummer on as lively world music percolation of djembe, riqq and shekere.

"Bluein' Away the Blows" has a guest slot for trumpeter Fabio Morgera. He sits in on "New Beginnings," too, along with trombonist Jeff Fairbanks, building the group up to a vibrant Art Blakey and the Jazz Messengers level for a fine blowing session effort, and the closer, "MPB" is a popping percussion fest, with congas player Nano Valerio joining the quartet alongside Scialla, injecting some gorgeous Latin grooves.

A knockout effort. Here's hoping it's a working band with more plans up it collective sleeve.