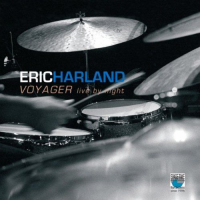 The long wait for Eric Harland's debut release is understandable. One of modern jazz's most dynamic and in-demand drummers, he's been a little preoccupied: early stints with Terence Blanchard and Wynton Marsalis; high profile gigs with Kurt Rosenwinkel, McCoy Tyner, and The Monterey Quartet; and tenures with the SFJAZZ Collective and Charles Lloyd's ensembles, are just a few of his many endeavors. Possessing consummate skills defined by superlative timing, propulsion, finesse and flexibility, it's no wonder it's taken him so long to release Voyager Live By Night.

About his exceptional band—recorded live in 2008, at two different venues in France—Harland reveals, "I really wanted to use these guys because of their creativity, 'Great Sense of Humor' and masterful ability on their instruments." He is joined by two former child prodigies—guitarist Julian Lage and pianist Julian Lage—as well as rising bassist Harish Raghavan and fierce tenor saxophonist Walter Smith III. With little time to rehearse before the concerts, the band's camaraderie and extremely tight bond is expressed via awe-striking performances

Harland's "Treachery" which opens the set, has appeared in live concerts by the MJQ and powerhouse Overtone Quartet, with whom the drummer has also played. Here, the piece sounds more vibrant, as Lage's colorful guitar adds a Pat Metheny-esque quality to the aggressive melody, followed by an arsenal of pyrotechnic solos, comps, and unison lines, from the other members. From the blistering feats of the opener to the serenity of "Intermezzo 1," the band is masterful, connecting the compositions like a narrative in an adventurous music travelogue.

A sense of exploration runs throughout the set—global rhythms, intense grooves, and emotive dialogues—a vivid imaging of Harland's itineraries and experiences. He can recall Elvin Jones's freedom, but can also conjure aboriginal patterns as evinced in "Voyager," where Lage lays down colorful African-influenced guitar phrases, as Smith stokes the fire with acrid soloing. This sets up one of the most memorable moments on the recording, "Intermezzo 2." At nearly eight minutes, Harland transforms his kit into a percussive firestorm of creative rhythms and textures both modern and primitive, and guttural vocalizations that are totally infectious. Propelled by the performance, the band segues into "Development" a raucous party that ends with enthusiastic crowd applause.

"Eclipse" offers a moment of respite, until Raghavan throws down a dark seductive bass line and Smith articulates a labyrinth statement. And if there's a question as to whether or not the band can swing, it's answered in spades with Sam Rivers' "Cyclic Episode," as everyone pushes the tempo to the extreme with precision, fire and soul, and incredible synergy—in particular, Smith's muscular horn. Things end with Eigsti's four-part "Get Your Hopes Up" which is equally enlightening and challenging.

Finally, a personal document of one of the baddest drummers on the planet, it is well worth the wait.