By Joel Roberts
December 6, 2009
Sign in to view read count 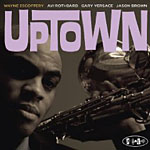 On Uptown, his fifth album as a leader, the impressive 34-year-old tenor saxophonist {Wayne Escoffery employs an old-fashioned soul jazz lineup of sax, Hammond B-3 organ, electric guitar and drums. But don't expect to hear the sort of bluesy "uptown" jams associated with classic soul jazz tenors like Gene Ammons, Eddie "Lockjaw" Davis or Stanley Turrentine. While he's a hard-swinging tenor with a big, warm tone, Escoffery's passion, expressiveness and long, flowing solos, as well as his thoughtful, forward-thinking compositions, place him more in the tradition of progressive post-bop tenors like Wayne Shorter and Joe Henderson.

The set opens strongly with Rothbard's hard-driving "No Desert," followed by an unusually upbeat take on Duke Ellington's "I Got It Bad" and another forceful tune from Rothbard, "Cross Bronx." The most inspired track is Escoffery's exploratory "Gulf of Aqaba," with its chant-like refrain and Middle Eastern flourishes. Here, as on several other tunes, McLean's inspiration is apparent in Escoffery's slightly sharp harmonies and his ability to combine mainstream, bop-oriented playing with more outside influences. The album's closing number, Escoffery's "Easy Now," is an easy, loping blues that's the group's most straight-ahead effort at capturing a vintage uptown vibe.