By GLENN ASTARITA
December 9, 2015
Sign in to view read count 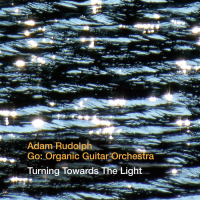 This acoustic-electric guitar summit by an upper-echelon congregation of modernists yields a polychromatic listening experience, conducted and organized by composer, percussionist, Adam Rudolph. And it should come as no surprise that the musicians' distinct styles and vernaculars create added value here. Rudolph's proven track record of thinking outside the box and expanding jazz and world-beat music into newfound frontiers, is partly founded on his Cyclic Verticalism principles, "that merge African-centric polyrhythms and East Indian rhythm cycles..." into the grand schema. This is the latest installment of Rudolph's fluid and ongoing Go: Organic Orchestra releases, fabricated with divergent extracts, goals and storylines. And in the album notes, he briefly cites the basis, impetus and artistic intimations on a per-track basis.

The guitar ensemble merges a multitude of genres and stylizations, including Avant expressionism, folk and rock amid lofty jazz improvisation campaigns. Moreover, the musicians fuse subtle rhythmic ostinatos with gently ascending motifs and a myriad of tonal contrasts, where the acoustic element casts an organic tinge along with numerous solo spots and contrapuntal excursions. Consequently, the artists' scope of attack isn't relegated to a melee or cutting contest, as Rudolph's conduction mechanisms include free-flowing discourses and well-defined overtures.

Kenny Wessell plays the banjo on the Delta blues piece "Lambent," outlined on a discreet ostinato vamp, accentuated by David Gilmore and Nels Cline's electric single note riffing, described by Rudolph as "entities of macro or micro electromagnetic formulations..." But on "Specular" and "Scintillant," the guitarists simply tear it up with a few subliminal nods to Ornette Coleman's Primetime unit. And the final piece "Turning Towards the Light," spins a dark ambient mood, executed with layered voicings and a few melodic leads, shaded with distortion techniques and EFX-based soundscapes. Ultimately, Rudolph and associates instill a rather esoteric concept with a thought- provoking sequence of musical events, often budging matters into another realm, starkly unlike conventional guitar summit fare.