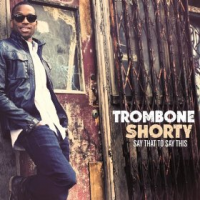 For his third Verve album, Troy Andrews, a/k/a Trombone Shorty, and his band Orleans Avenue go back to school—more precisely, back to the slippery yet organic "old school" sound of R&B, soul and funk, thanks to contributions from composer, instrumentalist and co-producer Raphael Saadiq, formerly of the soul vocal group Tony!Toni!Toné! How does Shorty describe his new album? "Really funky, like James Brown mixed with The Meters and Neville Brothers, with what I do on top; and we have a bit of R&B from Raphael's side. All the guys in my band are big, big fans of his, so this is a real dream come true for us. And he's a fan of New Orleans brass band music, which I didn't know beforehand."

At 35 minutes (albeit across ten tracks), Say That to Say This is hardly Andrews' magnum opus. But his trombone solos consistently punch, ride and swing the beat hard and funky, and its best tunes seriously cook. "Get the Picture" dives headlong (not just knee deep) into slippery New Orleans funk rhythms, then turns to stomp and rock beneath Andrews' looped "I play the funk" vocal. The bright instrumental "Vieux Carre" bows then dances toward the Caribbean while the horn section dishes out sumptuous Crescent City soul stew.

Andrews and Saadiq build "Shortyville," a model replica of Andrews' musical birthplace, from the ground up. Its lush rhythm track deftly grooves like D'Angelo and Marvin Gaye jamming up and down Bourbon Street: Every instrument tucks into each other just right, overspread like thick sweet jam by Andrews' trombone solo and then set on fire by his blistering, funk-rock trumpet solo until he burns it out.

Say That also features the historic reunion of The Meters on "Be My Lady," from The Meters' eighth and final album (New Directions, 1977, Warner Bros.). Andrews telephoned each Meter and asked if they'd like to record it with him, and each replied that if the others would do it, he was in too. "After we were done, George Porter Jr. pulled me aside and said, 'Thank you. You have gotten us to do something that people have been trying to get us to do for 35 years,' and I was speechless," Andrews now recalls. "Because The Meters helped to create a sound that gave me a foundation for doing what I do. It was one of those magical moments in life for me because, in New Orleans, The Meters are like The Beatles."

Say That to Say This; You and I (Outta This Place); Get the Picture; Vieux Carre; Be My Lady; Long Weekend; Fire and Brimstone; Sunrise; Dream On; Shortyville.