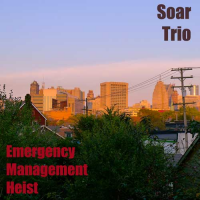 Edgetone Records prides itself on taking risks and offers extensive support for its roster of artists, who often compose and perform outside the box. Therefore, the cleverly titled Emergency Management Heist is an avant-garde trio outing that emits a sensation that the musicians could be planning some sort of raid amid pensive or gradually climactic incarnations. They broadcast grave situations via nervy meanderings but most always get to the root of the issue. Hence, the trio means business, but doesn't overpower or embark on free-form blowing contests. It's a concentrated effort as they methodically develop a course of action.

The musicians incite a bit of tension on "Down River #4." Commencing with Thollem McDonas' delicate and somewhat humble piano phrasings, the music takes on a dire outlook, exacerbated by bassist Joel Peterson's solemn lines, as if the plan has experienced a setback. But Skeeter C.R. Shelton's twisting sax notes either spring forth with optimism or brandish a sense of despair. They eventually sojourn into minimalism and generate oddball sounds, leading to staggered responses that conjure notions of angst.

While the artists reside within the avant-garde space, their penchant for relating a story is a positive attribute throughout the listening experience. Even though the imagery is up to the listener's intake and perception, the band succeeds at expressing a baseline for one's imagination to flourish.