BY IAN PATTERSON
January 19, 2014
Sign in to view read count 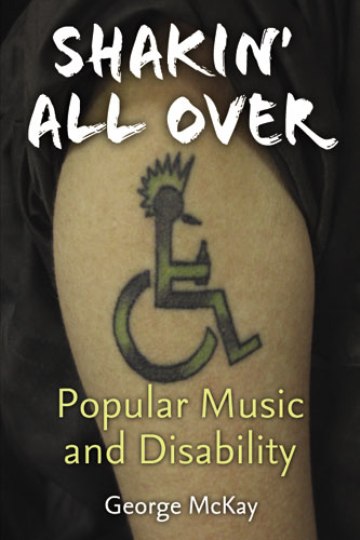 Given the vast quantities written about popular music culture it is perhaps surprising that so little critical space has been given to disability and popular music. Despite this anomaly, author George McKay, Professor of Cultural Studies at the University of Salford, argues that there exist identifiable and powerful links between popular music and the "damaged" body or voice: "The moment we begin to look for, to discuss disability (in popular music) we find it everywhere," he posits. In five lucid, thought-provoking chapters McKay explores the common cultural and social territory of popular music and disability, inviting us to reconsider how music is mediated, manipulated and packaged for public consumption.

Focusing mainly on popular music from 1950s American and British rock 'n roll onward, McKay examines the relationship between disability and popular song, the pop industry, live performance, mediation and marketing, the voice and fans. In the process, the author challenges our understanding of an important and ubiquitous aspect of mass culture usually taken for granted (the entertainment industry) and illustrates convincingly how popular music can "resound" disability studies.

McKay's cross-disciplinary though non-musicological approach draws from the lean but growing body of literature on disability and its manifestations in cultural spaces. Quoting Professor Tobin Siebers from his book Disability Theory (University of Michigan Press, 2008), the author underlines that "performing difference, when that difference is a stigma, marks one as a target, but it also exposes and resists the prejudices of society."

To this end, in examining the hurdles that disabled artists have encountered in an industry that celebrates beauty, talent and above all marketability, McKay's study also encompasses identity politics and issues of gender and sexual stereotyping within the industry and in society at large. The author describes "the lamentable limits of audience or industry acceptability and inclusiveness toward the disabled."

McKay acknowledges that women with disabilities get the short end of the stick and their lack of protagonism in these pages merely reflects a wider trend in the world of pop and rock. The notable exception is singer Connie Boswell, a star of 1930s and 1940s radio and film. A polio sufferer, Boswell appeared on stage and on set in a disguised wheelchair, or sat on a bar stool enveloped in a voluminous dress. It's difficult to think of many high-profile disabled female popular musicians/singers in the next 70 years, a gender imbalance, the author suggests, that raises questions as to the music industry's attitudes towards specifically female bodily impairment, and perhaps audiences' attitudes as well.

Analyzing male musical celebrities such as Neil Young, Hank Williams, Robert Wyatt, Ian Dury, Ian Curtis and Curtis Mayfield amongst others, McKay examines how polio, epilepsy, stuttering, and accident-induced paralysis have been manifested vocally and bodily in song and performance. In a chapter dedicated to polio survivors the author illustrates how the illness was not only a route into music—as prescribed therapy in the case of saxophonist David Sanborn—but how it encouraged innovative adaptive responses—Joni Mitchell's alternate guitar-tuning technique—that provided "the very route away from the commonplace toward the individual."

In a sense, "disability" is seen to been an enabler in the aforementioned cases, and indeed much of McKay's drift is towards highlighting the relationship between popular music and disability as a positive and empowering one. Jazz drummer David Rohoman—physically disabled at birth—played with rock band Kripple Vision in the early 1970s and Ian Dury's first main band, Kilburn and the High Roads; in an interview with the author he affirms: "Those successful years proved to me that if you have the determination, the drive, then you can achieve anything. Who dictates what the norm is?"

Dury, whose songs voice issues of disability, enjoyed notable success as the leader of the Blockheads despite the worst intentions of the BBC who banned his 1977 single "Sex and Drugs and Rock 'n Roll." The BBC also imposed a 6pm watershed on 1981's "Spasticus Autisticus," Dury's protest song—in the UN's International Year of Disabled Persons—about the place of the disabled in what he termed "normal land." For MacKay, Dury's "screaming music" was "an uncompromising voicing of the experience, the reality, of pain, on a pop record." The BBC may have decided "the norm" in Dury's heyday, but the singer had the last laugh—posthumously—when "Spasticus Autisticus" was performed in front of a global TV audience at the opening ceremony of the London Paralympics 2012.

The other side of the coin is McKay's portrayal of music as a disabling agent: the casualties of pop and rock's worst excesses; victims of media/fan intrusion; musicians as victims of repetitive stress injuries; the legions of musicians and fans who have suffered irreparable hearing damage due to excessive volume: "I have unwittingly helped to invent and refine a type of music that makes its principal proponents deaf" says The Who guitarist Pete Townsend. Fascinating too, the book's section on the struggle for disability rights and what Marc Shell—author of Polio and its Aftermath: The Paralysis of Culture (HUP, 2005)—termed "a remarkable culture of 'handi-capitalism' supported by celebrity culture and the entertainment business."

Thoroughly researched and engagingly written, McKay's illuminating cultural history of disability in popular music succeeds on another level as an important document of disability advocacy. If the majority of people in "normal land" are, to quote Dury again, simply the "temporarily able bodied," then books like this assume an importance that goes far beyond the confines of popular music. As it is, songs like Neil Young's "Mr. Soul" (epilepsy) or "Helpless" (polio) and Dury's "Dance of The Screamers" (disability) will never sound the same again.