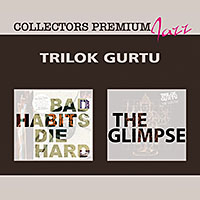 Well, it's been a good couple weeks since the last Rediscovery, leaving the pile of potential choices even higher than usual. So what better way to resume operations than to revisit an album that already sounded terrific when it was first released in 1996 but, remastered 18 years later as part of Art of Groove's Collectors Premium Jazz series, now sounds even better? The Collectors Premium Jazz series—pairing significant out of print recordings as two-CD sets along with, where possible, relevant bonus material—had already reissued two of Indian percussionist Trilok Gurtu's finest records from his time with the now-defunct CMP label: 1994's Believe, his first to feature an album- encompassing band—and released in the percussionist's first Collectors Premium Jazz set from earlier in 2014—was teamed with the record that provided the name for this group: Crazy Saints, his 1993 all-star session that featured stellar appearances from guests including Pat Metheny, Joe Zawinul, Ernst Reijseger and Louis Sclavis.

But it's one of the releases from Gurtu's second Collectors Premium Jazz set that is the subject of today's Rediscovery. 1996's Bad Habits Die Hard, Gurtu's fifth album as a leader and his first live date, features a slightly altered Crazy Saints quartet that also adds two guests—saxophonist Bill Evans and violinist Mark Feldman—lifting this October 1995 Cologne performance from merely great to truly transcendent.

Evans was a Miles Davis alum, and so being recruited for Gurtu's electrified version of east-meets-west fusion was an obvious choice. Less obvious was Feldman—a violinist better known in the left-of-center New York scene that includes artists like John Zorn, Bobby Previte and Dave Douglas. Still, in a career that has also included a lengthy tenure in guitarist John Abercrombie's "string" quartet—responsible for ECM Records' Class Trip (2004) and Third Quartet (2007), and which, no doubt, led to the violinist's own extraordinary ECM release, What Exit (2007)—it's a revelation to hear him play with a different kind of reckless abandon in the context of the Crazy Saints' often knotty, largely high octane and always groove-heavy music.

As for the Crazy Saints? With guitarist David Gilmore on board—already revisited in a Rediscovery of his breakout group Lost Tribe's eponymous 1993 Windham Hill Jazz debut—Gurtu has plenty of fusion firepower from a guitarist who can shred with the best of them. Electric bassist Chris Minh Doky is equally virtuosic, whether anchoring the music or soloing with similar power and invention; and yet, despite this album's unequivocal fusion leanings and pyrotechnic gymnastics, there's not a wasted note or moment of excess to be found.

Bad Habits Die Hard does, however, represent a change for Gurtu, as keyboardist Daniel Goyone—one of the percussionist's only constants, from his 1988 solo debut Usfret and 1991 follow-up Living Magic (both also on CMP) through to Believe—is replaced here by Andy Emler. Already well-established by this time, like Feldman, Emler had, nevertheless, never played anything like this before—or since, it appears, going on to participate on Gurtu's 1996 more acoustic CMP tribute to Don Cherry, The Glimpse (the second disc in this Collectors Premium Jazz set).

Just as Goyone had been, Emler was more than just a player with Gurtu on Bad Habits Die Hard, assisting the percussionist with the arrangements of four of its seven lengthy tracks. He also contributes the only non-Gurtu original to the set: the dark-hued "Bad Boys," which despite featuring an exhilarating Feldman solo brings the energy level down from the record's incendiary, contrapuntal and polyrhythmic opener—a new composition that Gurtu would later revisit as the title track to his collaboration with drummer Simon Phillips and Germany's NDR big band, 21 Spices (Art of Groove, 2011).

With a 74-minute runtime, there's no real room for any bonus material (The Glimpse includes a live version of the title track), given that Bad Habits Die Hard's shortest piece is just under eight minutes and it's longest approaches the fourteen-minute mark. But after these thrilling 74 minutes, only a few of the bravest souls, with the strongest of hearts, would be ready for more.

By this time Gurtu had established a name for himself through associations with Oregon, John McLaughlin, Barre Phillips, Nguyen Le and Shankar; but it was across his six CMP recordings from 1988 through 1996 that Gurtu jumpstarted his career as a leader that continues to this day, with his most recent album, Spellbound (Moosicus, 2013) delivered in a stunning live performance at Hamburg, Germany's 2013 ELBJazz Festival.

Gurtu's past collaborations were all touchstones upon which he built his music—as would the Indian tradition that has positioned him as one of the few tablaists that can be mentioned in the same breath as tabla master Zakir Hussain, the percussionist even inviting his band mates to participate in a round of Konnakol (Indian vocal percussion) during the set-closing "Carlinhos" (first appearing on Believe, the only track that isn't new to Bad Habits Die Hard). But unlike the more purist Hussain, Gurtu's hybrid percussion rig—which at the time included a small drum set made up mostly of Rototoms that he played crouched down rather than on a drum throne, along with assorted cymbals, bells, wind chimes, wood blocks, water gongs and more—was yet another sign of his clear intent to bring east and west together.

Effortlessly moving between his various instruments, Gurtu is, on one hand, a most traditional tablaist on Emler's atmospheric "Bad Boys" while, on the other, delivering a punchy groove of sharply punctuated, polyrhythmic Indo-funk with his knotty "Returning Home"—featuring a set-defining solo from Evans that builds relentlessly to a fiery climax. Gurtu drives the even more up-tempo "Watapa" with a combination of powerhouse pulse and unfettered, empathic engagement with his band mates, while Minh Doky delivers an impressive solo before Emler takes over and waxes Jan Hammer-like in a synth-driven trade-off with the equally expressionistic Gilmore, Evans and Feldman that must have left the audience exhausted...but, at the same time, exhilarated.

A potent set that, in many ways, acted as a consolidation and punctuation mark on Gurtu's solo career to date, Bad Habits Die Hard is 74 minutes of no-holds-barred, take-no-prisoners Indo-centric fusion that sounds even better on this Collectors Premium Jazz remaster...and better still through Tetra listening instruments, which even more vividly reveal both the visceral punch and layers of detail delivered by this, one of Gurtu's best live bands ever. It's an album that begs Rediscovery—both a terrific reminder, for existing fans, of his early days as a leader while, at the same time, being the perfect entry point for the uninitiated to dive into Gurtu's now-extensive discography as a leader...but also his impressive work with so many others.