BY JIM TRAGESER
December 1, 2016
Sign in to view read count 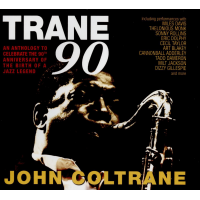 Along with Miles Davis, Duke Ellington and Louis Armstrong, the late saxophonist John Coltrane is one of the most anthologized figures in the history of jazz. He is also one of the most studied, with at least four full biographies on Amazon, and dozens of other books looking at various aspects of his music. The number of magazine articles about Coltrane surely runs into the tens of thousands.

And so the first question regarding a new, four-disc box sext anthology of his music is "Why?"

Nearly his entire catalogue remains in print, including his stints as sideman for Davis and Thelonious Monk. Anthology specialists Rhino issued two popular box sets of Coltrane in the 1990s: The Last Giant, a two-disc collection released in 1993; and, two years later, the seven-disc The Heavyweight Champion, which contained all of his sides cut for Atlantic. In 1998, we got an eight-disc collection of all of his Impulse recordings, The Classic Quartet: Complete Impulse! Studio Recordings.

So why a new box set?

In the case of Trane 90, the timing of his 90th birthday on September 23 is the answer to the questions of why and when.

As to the "what" of this new release, it's a mixed bag.

Trane 90 is subtitled "An anthology to celebrate the 90th anniversary of the birth of a jazz legend," but it only traces the first half of his 10-year run as an established leader and star.

While Trane 90 improves on earlier anthologies that were only able (or willing) to include tracks from one label or another, the producers of this collection managed to get agreements with the various labels for whom Coltrane recorded, so included here are examples of his Impulse! sets as leader (missing from the two Rhino box sets); his Atlantic sides; plus stuff he recorded with others on Columbia, Prestige, Riverside, Savoy, Decca and Bethlehem. They also got access to previously unreleased material—live performance tapes and private tapes.

But the fact remains that this anthology simply stops at 1962, five years before Coltrane's death. The last years of his life were stylistically unique, and while his "free jazz" period toward the end of his life may not be viewed as being as influential as his modal work of the 1950s and early '60s, it's absence here is a significant gap in what purports to be an overview of his life's work.

Given the wonderfully, deeply detailed liner notes by Simon Spillett that passionately (re)make the case for Coltrane's importance in the development of modern jazz, the absence of any representation of the last five years of his life is all the more glaring.

And yet, given all that, this may still be the single best starting place for any listener unfamiliar with Coltrane's music to begin that exploration. For just over $20, the listener gets to trace Coltrane's career from his earliest recordings as a member of Dizzy Gillespie's groundbreaking early '50s combo, that helped develop the post-swing bebop style; playing behind the great Ellington star Johnny Hodges; as a key member of Miles Davis' late '50s groups that fleshed out cool jazz; and as a leader—first coming into his own and then quickly growing in confidence and vision, quite simply redefining what jazz was.

It bears repeating, if only for folks just discovering jazz, that Coltrane is one of the most important and iconic figures in post-swing jazz. And this collection does a good job of laying out two-thirds of that journey.

What is here is illuminating, educational and often glorious: the classic sides he cut with Davis ("Well, You Needn't," "Straight, No Chaser," "On Green Dolphin Street") and Monk ("Trinkle Tinkle"); the standards he wrote and performed ("Naima," "Giants Steps") in their original, historic versions; a live version of his reimagined take on "My Favourite Things"; and a whole disc of guest appearances on other artists' albums, after he'd achieved stardom and was the in-demand guy to have on your record, including guest stints with Sonny Rollins, Art Blakey, Cecil Taylor and Cannonball Adderley.

The combination of different settings and roles that Coltrane experienced and played during his too-short career—sideman, leader, visiting jazz royalty—provides a context other anthologies cannot. And when you're reading the liner notes, and realizing just how much music Coltrane and his colleagues recorded—how often they went into the studio back then—this collection allows the modern listener to experience the sense of discovery and excitement that his fans felt as his recordings kept coming out, month after month, year after year—each new LP a valued treasure to be explored over and over again, all the while looking forward to the next one.

Whatever its failings, this is still a recommended set for anyone unfamiliar with John Coltrane.