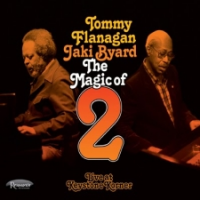 The story of this previously unreleased performance by pianists Tommy Flanagan and Jaki Byard at San Francisco's famous Keystone Korner begins with its unusual distributing label, Resonance Records. The original brainchild of studio owner George Kalbin, the label exists as part of the larger endeavor, the non-profit Rising Jazz Stars Foundation, dedicated to the discovery and cultivation of the next generation of jazz stars. This aspect of the RJSF produced recordings by "newer" artists: Andreas Oberg's My Favorite Guitars (2008), Christian Howes' Heartfelt (2008).

The label also gave light to established but underexposed artists with Bill Cunliffe's excellent The Blues and the Abstract Truth Take 2 and Kathy Kosins's homage To The Ladies of the Cool. But where Resonance Records has really established itself is as the curator of previously unreleased live recordings like Gene Harris' Live in London (2008) and the historic recordings Freddie Hubbard's Pinnacle: Live and Unreleased from Keystone Korner (2011), Wes Montgomery's Echoes Of Indiana Avenue (2012) and Bill Evans' Live at Art D'Lugoff's Top of The Gate (2012).

The Magic of 2 a previously unreleased live recording of a February 1982 show by Flanagan and Byard at the Keystone Korner, joins Hubbard's Pinnacle as a second installment of the label's "Keystone Korner Live Discoveries." It is significant in it is an example of the little heard genre of duo piano concerts (An Evening With Herbie Hancock & Chick Corea (Columbia Records, 1998) and Patricia Barber & Kenny Werner—Live In Concert (Floyd Records, 2011) readily coming to mind). The 30-plus year old sound of the recording is brightly acceptable considering this concert with recorded with no intention of releasing it commercially. The after- engineering by Fran Gala and Klabin restores much that time has taken.

The material is all standards, the most recent being Chuck Mangione's rumbling "Land of Make Believe," almost thundering here and Stevie Wonder's "Send One Your Love." But we are getting ahead of ourselves. The performance begins with be bop, specifically Charlie Parker's "Scrapple from the Apple." Both pianists are warmed up, filling in all of the blanks in this modern jazz paint-by- numbers. Flanagan and Byard's specialty is grand lyricism gently shared, except when the gentle is not required like here. This playing is both an example and tribute to the spontaneity of jazz and the high level of creativity required to sit down with no previous practice and to play like this. The Duke Ellington— Billy Strayhorn axis is the best represented composing school here, with a gently swinging "Satin Doll," a Flanagan solo take on "Something to Live For," the two together again on a driving "All Day Long" and introspective "Chelsea Bridge."

The Magic of 2 makes a notable addition to this new series of unreleased live recordings by Resonance. It is so fine that we must wish for more of the same in the future.

Introduction; Scrapple from the Apple; Just One of Those Things; Satin Doll; Something to Live For; Send One Your Love; Our Delight; All Day Long; Sunday; Chelsea Bridge; The Land of Make Believe; The Theme.