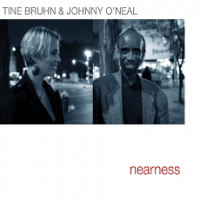 A curve ball can be the cause of consternation but it can also go the other way, ending up as a serendipitous game changer. Such was the case with the initial meeting between vocalist Tine Bruhn and pianist Johnny O'Neal. Both figures first encountered one another in the summer of 2011, when Bruhn's steady pianist backed out of a gig on short notice and sent O'Neal as his replacement; they've been working together ever since.

Bruhn and O'Neal came up in different times and places, with the young Denmark-born singer going the modern day Europe-to-Berklee-to-New York jazz route and the Detroit-born pianist earning his stripes with drummer Art Blakey, vibraphonist Milt Jackson and various other long gone luminaries, but they both share something special: a love for the act of seduction-through-standards. On Nearness they take on ten tunes that have been done a thousand times before, but that doesn't matter; when the music is treated the right way, nobody ever minds hearing it a thousand-and-one times.

Bruhn's strength is her natural, at-ease demeanor in delivery. Her vocals are hardly passive, but they don't push and try to go beyond what's needed and appropriate. O'Neal, likewise, is the epitome of class. While he might toss off a quick run that can turn heads, he's just as comfortable caressing the corners and edges of these songs. For him, it seems like performing this music is like having a drink with an old friend or kissing a loved one as an introductory or parting gesture. No artifice is involved in his work; O'Neal is pure honesty.

While this is essentially a duo date, tenor saxophonist Stacy Dillard makes it a three-way on four numbers and he fits in quite well. He sets the scene on "But Beautiful" and works his unassuming magic in the margins and/or middle ground of this music. Despite taking different artistic paths, all three of these artists have arrived at a similar place where they can share their experiences and speak the same language freely; this state of nearness is the charm behind this album.

I’ll Be Seeing You; But Beautiful; Easy to Love; The Nearness of You; If I Should Lose You; My Foolish Heart; Just in Time; Never Let Me Go; All of You; Skylark.