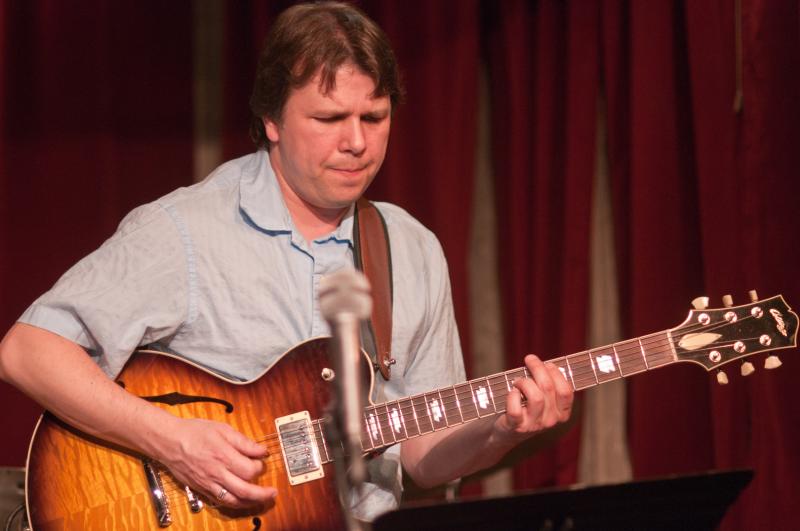 I've known Brooklyn-born guitarist Tom Guarna for maybe twelve years, give or take. He used to literally live around the corner from my apartment in Park Slope, Brooklyn. We worked together in a band that drumming phenomenon Rodney Holmes had put together. I eventually asked Guarna to join an organ trio I was trying to start. This organ trio was called Mad Science and eventually, Holmes joined us and we recorded two albums —then a third with Kenny Grohowski on drums. Guarna and I worked and recorded with fusion legend Lenny White's quartet, and we've actually worked together in a number of other configurations.

Guarna is simply a great guitarist, perhaps one of the most underrated in the jazz world. He's got great ears and chops, but he has what many on that instrument lack: taste! The thing I love about Guarna's playing the most is the care in which he chooses his notes. But don't be fooled, he can burn with the best of them. He's very versatile as well; he knows everything from classical and flamenco guitar techniques, to bebop, fusion, and beyond. Guarna and I will be performing together at Smalls' in New York on July 22nd and 23rd. I wanted to feature him in jazztruth before then, so here's my interview with him:

Tom Guarna: Well, my dad played guitar. He was always playing or practicing. I used to sneak into his practice room and play air guitar. It was just a natural progression.

GC: Describe your earliest musical memories. Do you think growing up in the New York area was important for your musical development?

TG: My earliest musical memories were of my dad playing around the house. He would have people over to play or once in a while he would take me to his rehearsals. I definitely think growing up in New York was invaluable to my musical development. I was able to go out to clubs and listen to all the great musicians I had been listening to on recordings. To have the privilege to be able to go out on almost any night of the week and hear all these great musicians was inspiring. I learned so much just from being there.

GC: Do you have goals as an improviser?

TG: I think the goal of any improviser is to be able to express what you are feeling through your instrument without any technical issues getting in the way. In order to achieve that, I spend a lot of time practicing to try and eliminate as many of those issues as possible. That is a life long pursuit.

GC: Who are some improvisers who inspire you?

TG: There are too many to list but to name a few, Bud Powell, John Coltrane, Wayne Shorter, Herbie Hancock, Chick Corea, [and] Allan Holdsworth. The list just goes on and on.

GC: How did you get into composing?

TG: As soon as I started learning how to play, I was trying to write my own songs. I later studied classical guitar at Brooklyn College. There I was lucky to study orchestration and composition with Robert Starer. In his classes we studied works from Bach to George Crumb. It was a great experience. I think that is when I took composing much more seriously.

GC: What motivates you as a composer?

TG: I enjoy writing my own songs. Life experience is a motivating factor. I try to be open to all things. Anything can be motivating or inspiring if you are open enough.

GC: What were the challenges of going back to school and getting your degrees? Do you feel like you learned something, even though you are already an established player?

TG: I did learn quite a bit. There is always something to be learned. Some things I learned were brand new and other things were just reintroduced and solidified. The real challenge while going back to school was trying to tour and earn a living. During my undergraduate degree at The New School, it was a bit easier to do that. When I went to Juilliard for my Master's Degree, it was much more of a challenge. The Juilliard program is very small, so it was hard to leave school for weeks at a time to tour. In any case, it worked out. I would have to say that the overall experience was a positive one.

GC: How do you see yourself as an educator?

TG: Teaching is a very hard job, if you really care about it. I feel I am genuinely interested in helping my students. I feel that is one of the elements that make me an effective teacher.

GC: Do you have some upcoming projects/gigs that we should know about?

TG: I am starting up a new band. I will be playing at the 55 Bar on Sunday May 15th, with a new group of mine. This is more of an electric project—keyboards, electric bass, etc. It's in the very beginning stages. I have not selected all the musicians and I am still composing songs for this gig. I hope I can get everything together by then and record this year. I am also playing in bassist Will Vinson on saxophone and Manuel Valera on piano. Another project I'm involved in is playing in pianist Helen Sung's new group with Marcus Gilmore on drums and Josh Ginsburg on bass. There is also a possibility of doing a project with guitarist Jimmy Herring, if our schedules permit. That would be really fun.