Jan Sturiale: Do not disturb The Peace 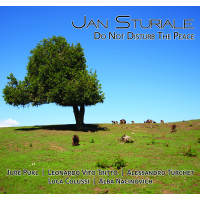 Do not disturb The Peace sets out the formation in which Jan Sturiale envisages his music. This guitarist makes a step forward and changes the trio format from his previous CD, Strange Meetings (Drawtheline Records, 2009), to a quintet, which gives a complete body, harmoniously and melodically, to his compositions.

The ten tunes on this album show Sturiale's musical personality through a constant connection with a rock essence that meets with a contemporary jazz language. But there is not just rock reminiscence in here; one can also encounter funk beats in "This Land" or a lyric facet expressed by the piano in "Nekoc" where the silent spaces themselves are the theme.

The compositions on Do not disturb The Peace establish a passages structure which can be observed in all tracks: a musical pattern is developed in changing textures. Thus, this makes the album enjoyable for the wider public, due to the strong melodies that amplify the core concept. This melodic prominence is, indeed, increased with the vocal lines present in different tunes.

Sturiale's repertoire is varied rhythmically: the up-tempo tunes like "Fourth Ave" are combined with ballads like "Lonely People," a track on which the guitarist offers more intimate improvisations. But, the main focus of this recording is how the band leader finds the meeting point between the piano and the guitar harmonic roles, keeping the sound balance as he does so.