By CHRIS MOSEY
November 5, 2015
Sign in to view read count 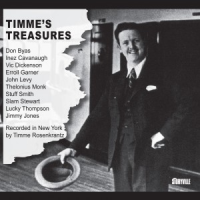 Danish nobleman Niels Otte Timme Baron Rosenkrantz could trace his ancestry way back to the Anglicized Rosencrantz in Shakespeare's Hamlet.

He became a journalist and was the first European to report on the jazz scene in Harlem, writing for Scandinavian publications and for Downbeat, Metronome and Esquire in the United States and Melody Maker in Britain.

Doug Dobell, proprietor of a London jazz record store, who was a friend, called upon the shades of Duke Ellington, Art Tatum, Coleman Hawkins, Billie Holiday and Fats Waller to bear witness that Timmy, as everybody called him, "lived the music as no other non-musician has. There was scarcely a musician he didn't know intimately."

Timme himself said, self-effacingly: "I'm just a little layman with an ear for music and a heart that beats for jazz."

But—and it's a big but—he is credited with the discovery of Erroll Garner.

The jazz baron's historic recording of the pianist playing "All The Things You Are" with Lucky Thompson (tenor) and Timme's African American girlfriend Inez Cavanaugh (vocal), made in 1944 in his flat at 7 West 47th Street, is included in this collection.

As is his recording of the then unknown saxophonist Don Byas playing "Let's Go," with Thelonious Monk on piano and "Lady Be Good" with Slam Stewart on bass.

Monk hung out at Timme's flat long enough in 1944 to lay down "These Foolish Things" and his own classic "Round Midnight."

The collection is padded out with three 1945 radio broadcasts but remains thin.

Sadly, one of Rosenkrantz' greatest triumphs, a recording he himself produced for RCA Victor in 1938 under the title "Timme Rosenkrantz And His Barrelhouse Barons," with Rex Stewart (trumpet), Byas and Russell Procope (tenor saxophones) and Tyree Glenn (trombone), was not available for inclusion.

It was originally released as a double-sided shellac record and Timme was fond of recalling how, three years after it came out, he received a royalty check for $13.80.

He arranged jam sessions at Café Bohemia in Greenwich Village and the Famous Door on 52nd Street.

He died in 1969 but his book Harlem Jazz Adventures—A European Baron's Memoir, 1934-1969 is available for those with deep enough pockets at: www.JazzBaron.com

Track Listing: That Old Black Magic; Johnny Come Lately; Tea For Two; Embraceable You; Lady Be Good; These Foolish Things; ‘Round Midnight; Swing Test 2149; Let’s Go; I Got Rhythm; Cuckoo; All The Things You Are.