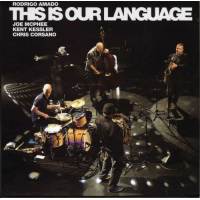 Experimental jazz, largely framed on wide-ranging improvisational tactics, inhabits a tightknit if not cloistered community, partially by default due to its avant-garde underpinnings. With the album moniker This Is Our Language, eminent Portuguese saxophonist Rodrigo Amado imparts a bond or connection to free-jazz pioneer Ornette Coleman's fifth album, This Is Our Music (Atlantic, 1960).

Legendary saxophonist, trumpeter Joe McPhee consummates the frontline, as the overall muse encapsulates a hybrid exposition of temperate and supersonic explorations amid nods to free bop and Coleman's historic quartet-based fare. As expected, Amado's full throttle and sweltering performances come to the forefront via a beauty and the beast type hodgepodge of garrulous pulses, extended soloing jaunts and ravenous exchanges, including drummer Chris Corsano's zippy patterns and rumbling grooves.

"Ritual Evolution" builds steam as an investigative piece where prominent Chicago-based bassist Kent Kessler's creaky arco notes frame the band's start/stop momentum, topped off with tentative mini-motifs and staggered interactions. They pose a linear sequence of jittery or perhaps nervy dialogues, featuring McPhee's flirtatious and contrasting pocket trumpet lines. Marked by a gradual ascension, the rhythm section pushes and pulls matters, leading to a simmering climax, amped by the hornists' brisk flurries and terse exchanges. But during the bridge, Amado shifts the flow into a Albert Ayler marching band style vibe leading to closeout as each track tells a distinct story on this polygonal production, accentuated by the quartet's perceptive teamwork.