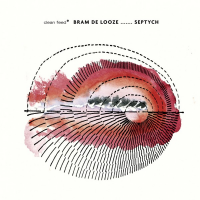 Young Belgian pianist Bram De Looze leads a 7-piece outfit of unusual instrumentation and multinational origin through a captivating and ambitious journey on Septych. While De Looze might be best known for his small group work, with his own LABtrio and drummer Dre Hocovar's combo (checkout Coding of Evidentiality (Clean Feed, 2015)), here he flexes his compositional muscles to inspire a program which mixes contemporary music influences with straight improv. In a perplexing twist, while the written selections sound cryptic, the improvisations are often are very focused and suggest organization in their concentration on particular instrumental combinations or tonal areas.

In its episodic and genre hopping nature, "Thorium" gives a strong steer on what to expect. At the start the three saxophones of Gebhard Ullmann, Bo Van Der Werf and Robin Verheyen indulge in breathy conversational interplay, before a sudden tutti. The leader's lone piano sketches out a theme, which is taken up by tenor, and one of the cellos. Squalling horns and flailing piano engender another dense free for all, as De Looze oscillates between cerebral and energetic. After the piece reaches a crescendo it stills to allow theme variations to reappear. Finally a slow moving three note motif heralds a pastoral section for the twin cellos of Daniel Levin and Lester St. Louis and piano to finish. The penultimate "TH 90 Disrupted" shares some of the same material, and together with an intervening sequence of improvs for varying line ups, gives the album the feel of a suite.

Of the five extemporized encounters, "Outreach" begins with a subset of the unit. As De Looze supplies a loose structure, others gradually contribute though rarely everyone together. It finishes with a cello phrase repeated in electronic loop. "Interlink" is a deliberately held in check exchange between Van Der Werf's baritone and De Looze's lucid piano which delves into abstract lyricism. Similar restraint manifests in "As Below," a duo for Flin Van Hemmen's metallic brushed drum rattle and spare piano, although incorporating an animated crossfire at its center.

Conversely though credited to De Looze's pen, "Xenolith" sounds like a conduction in which Ullmann's vocalized bass clarinet and the cellos feature prominently. In "Seven Trees Out East" the cellos shadow Ullmann's perky flute and Verheyen's soprano counterpoint, before a rhythmic saxophone trio evokes a hybrid between a chamber ensemble and World Saxophone Quartet. The concluding "Ambiguous" represents the only number which might pass for jazz with swinging pizzicato cello, drums almost in tempo, spiraling Ullmann tenor and piping Verheyen soprano soaring over one of the tightest passages on the disc.

De Looze has created an unsettling makes for intriguing listening and augurs well for the future. As ever with larger bands, the one gripe is not knowing who plays what. Some indication which cellist is in which audio channel for example would help.