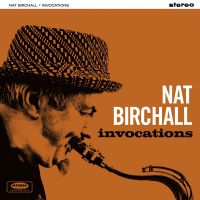 There is a feeling of a new beginning on this collection from Nat Birchall. Superficially the album is released on Henley-on-Thames' Jazzman records rather than Birchall's own Sound Soul and Spirit records, on which he released the wonderful World Without Form and classic Live in Larissa. More tangibly only Adam Fairhall on piano remains from those two collections, representing the last common link to the pool of musicians Birchall and Matthew Halsall drew from in their classic collaborations on Gondwana records. Halsall is on record as saying that the parting was amicable, which seems reasonable given that Birchall was a better fit fit for the spirituality of "When the World Was One," than the gentler more composed "Into Forever." The latter was the first Halsall record that Birchall had not appeared on at least one track, so it is hard not to feel that the end of a chapter has been reached.

If that is the case then Invocations finds Birchall in creative rude good health. The key to his music is his beautiful deep tone married to an instinctive understanding of the need to give that sound space to breathe. It's a wordless expression of feeling for the music, showing that 'passion,' a word devalued through overuse by lesser artists, need not be synonymous with some quasi-sophisticated branding approach, corporate mission statement or pointless competition with his peers. Birchall, it should also be noted, eschews the critical shorthand "spiritual jazz" preferring to describe his music as "spiritual in its intent ...that attempts to connect to, or invoke, the Universal Spirit or Sat-cit-ananda" and there can be no doubt of the depth of feeling, love and desire to communicate through the music he plays.

The other reason for the sensitivity around the "spiritual jazz" tag is that it tends to imply a reductive simplification of the music, albeit in the service of higher goals, when in truth Birchall brings a wider palette to the listener. Read his eloquent website blog on how he reached jazz via the dub reggae of the 1970s, finding something in John Coltrane's 'Blue Train' era tenor saxophone sound that reminded him of Tommy McCook, and it's hard not to ascribe his audible sense of musical space and dynamics to these early tastes. Birchall also emphasises that he was a listener before he was a musician, leading him to value the totality of the sound, the feel and timbre of the instruments and the way that they were recorded, over the simple actual notes played. This is something that, arguably, also comes from that golden age of Jamaican music and feels refreshing at a time when even our music finds little middle ground between dry intellectual games and pointless easy listening.

Dues are paid to John Coltrane with the cover of "To Be," but the four lengthy Birchall compositions that form the rest of the collection are if anything better still. Among the highlights are the way that "Invocation" hits a soulful piano and bass riff shortly before the 5 minute mark like Alice Coltrane covering Horace Silver; or how opener "Song to the Divine Mother" winds a slow, intense, Birchall solo around the rhythm, the emotion growing as it progresses into Adam Fairhall's rippling piano solo. As befits the senior collaborator in the band, it feels as though Fairhall features more prominently on this album—his piano solo on final track "A Luta Continua" is excellent being both powerful and engrossing as it emerges over the soulful bass line in the first half of the piece. Birchall joins around the halfway mark to bring the track and the album home to a satisfying conclusion.

There really must be something in the water in the North West of the UK that has brought forth so much talent in recent years. Younger, more open in outlook and less conservative than the cut throat London scene that tends to monopolise the attention of the UK media, the likes of Birchall, Matthew Halsall, Go Go Penguin, The Weave, Matt Owens and the Beats and Pieces Big Band are among those who have emerged from the area in recent years and long may it continue. Invocations continues the almost routine excellence that Birchall has given us of late, and if Live in Larissa taught us anything it is that live he could stretch these pieces still further. A light in a sea of mediocrity, the prospect of Birchall playing these tunes live in 2016 has just made the New Year a very appealing prospect. Unreservedly recommended.

Song to the Divine Mother; Invocation; To Be; Njozi (Vision); A Luta Continua.