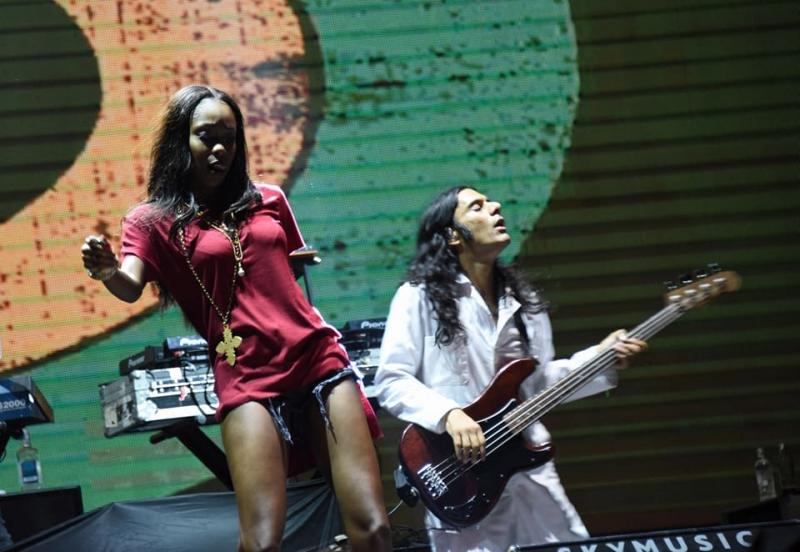 It's been awhile since I witnessed a show like this. The ARM's stadium which is basically an open field resounded to plenty of driving beats, deep basses and expansive and hypnotic ambient sounds as Thievery Corporation in its expanded form delivered a sharp and hyper-energetic yet relaxed set.

Thievery Corporation's music is an interesting amalgam of different sorts of musics. In a way, it's the perfect example of music that could easily be called "world music." Its music consists of rich confluences of dance beats, reggae basslines and vibes, dub effects and tranquil ambient sounds with a hypnotic quality, jazz influences, and Brazilian music—all of this is further decorated by exotic sounds like sitar and vocals. Regardless of its collage nature it still has a strong identity and there is a very easily recognizable approach to songwriting and sonic identity. So it's no surprise that the Thievery Corporation's music was and still is a club favorite. God knows how many times this duo's music has been played in clubs worldwide. It is devoid of aggressiveness while still being dynamic and it's a music one can easily breathe with. Those irresistible melodies were obviously built to last, while the mix of sequenced synthesizers, various beats and vibes and exotic sounds have retained its surprising currency.

But what really amazes is how this duo's music can easily translate in a live setting of a stadium filled with thousands of fans augmented by a live band and a flesh-and-blood musicianship. In a live setting, the touring band has expanded beyond the basic duo of Rob Garza and Eric Hilton, into a collective that encompasses a drummer and percussionist, a bassist, guitarist, and four vocalists. What was evident from the opening song "Forgotten People" was how the stadium erupted with joy when the sounds and the beats overflowed the crowds. While the band's current tour served to promote the band's new album The Temple of I and I that was released this year, the set continued with "Until the Morning Comes" until they began introducing songs from the new album such as "True Sons of Zion," "Letter to The Editor," "Weapons of Mass Distraction," the magnificent "Fight to Survive" but those were mixed with various other older songs such as "Sol Tapado" (from Saudade) or "The Heart is a Lonely Hunter" (originally a duet with David Byrne of Talking Heads).

All of these songs provided many climaxes, hills, and valleys in the dynamics. What was evident was that the whole band didn't lack any imagination, charisma, or bravado and it had something that all good bands excel at—it radiated tangible joy. When all of these songs are pouring off a stage at high volume, with the full force of great musicians locked together, it is impossible not to feel uplifted. With every song on the set list, Thievery Corporation radiated with joy and positive energy and it was something to behold. All around there were smiling, singing people dancing in the company of their friends or partners with a joyous abandon. What was also impressive was how effortless it seemed to perform this music, the camaraderie between the singers and the musicians and the emotional connection with the people in the attendance. Having wowed with the new songs, the encore gave songs from the band's considerable catalog like "Lebanese Blonde," "The Richest Man in Babylon" but it ended with the closing track from the new record "Drop Your Guns."

Standing behind the band with his keyboards was its leader Rob Garza who obviously was encouraging a mood of care and camaraderie between the musicians. In the end, this was a triumphant event. The sheer liveness of this super— tight and yet super relaxed band was utterly thrilling. What better band and music for these uncertain times. .